So I want to make clear AgOpenGPS is my preferred choice in guidance and the one i use. It is has a feature set not available to current commercial systems.

But its cool there is finally a 3rd Party plug and play RTK GPS unit for Deere. AgraGps has just released there CRG receiver. Built in Alberta!

That looks great! I couldn’t quite follow the article, but would this still require an rtk unlock on the jd screen?

I was emailing him yesterday and he said it doesn’t need an unlock. The receiver is an F9P and sounds like the price is $4700 US

That’s really cool! Leica did this 15 years ago with their mojortk console, but they quit selling it and have no support. It’s nice to have something with new hardware and support now.

Deere Co asked for one for “performance testing” purposes. So it will be interesting to see how this device does in the market moving forward.

Its neat that is less than just the RTK Unlock in Canada, choice is a wonderful thing.

Likely they want to find out how well the reverse engineering is and if they can release a firmware update to break them! But I’m just that cynical about the green execs.

If he has trouble sourcing the RTK receivers themselves, maybe he could sell everything but the actual F9P (or SkyTraq or whatever) and just let the customer source his own. I’d be up for that. So the big difference with the 7000 is no errors with phone interference? 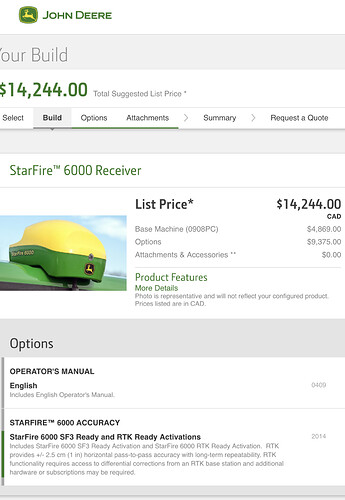 AOG with F9P! All the RTK benefits, with no 2nd mortgage needed.

No RTK unlock on the JD screen needed. The RTK unlock with JD
is on the SF6000.