Got the software downloaded and working on setting up my first simulation.

I have setup the boundries by tracing on bing maps. Seems to be saving correctly.

Then go to headlands under fields, and my boundry shows, add 3 passes all looks good. Click the arrow to save.

I get the headland option on the screen but headlands dont actually show on the display.

What format does the boundary file save as?

I will have to look when I get home. I had downloaded 2 different versions. It works as it should on the older version, but not on the newest release.

Tried both drawing in AOG as well as importing the KML from google earth.

KML from google earth seemed to work the best on the older version.

What format does the boundary file save as?

The boundry file is saving in .kml

I am missing something, because I drew the field that defaults in the bing window and it appeared. Soon as I go to mine and draw it out it wont appear.
Changed sim coordinates as well to try and notta

works as it should in the older version, just 5.6.2 is giving troubles 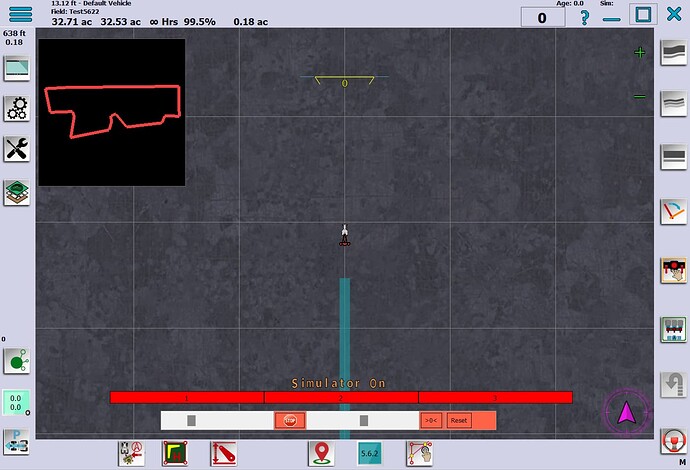 Not sure how I had it working on 5.6.0, but appears the sim coordinates were pulled somehow from bing. not sure why originally. Issue was i was starting the field in the wrong sim coordinates, and then drawing the boundary. once I reset, then changed the coordinates first, then drew it worked. I was drawing too soon.

Your fixed coordinates in AOG were outside the boundary so you were actually miles away from your field?

Yep, that would explain why you could not see it on screen. I’ve done the same

Pleased you worked it out.