After learning about AgOpenGPS, this summer I wanted to get a gps going in our MacDon Swather. However after reading into this a bit more, I see it makes use of wheel angle sensors. Of course the swather uses a hydrostat, so there wouldn’t be a wheel angle to measure.

Does this mean there is no way to get AgOpenGPS to steer our swather?

Thanks for any help

put a sensor on control arms on hydrostat pump. When arms have a differiential it would show an steering angle.

I think you should mount the steering sensor on the rear wheel. After all, if the hydrostat turns the machine, the wheels are turning, I don’t know how it works in practice, but it’s worth a try!
Alternatively, you could use speed sensors on each of the drive wheels and measure the difference, no difference would be zero steering angle. It would require a small modification of INO.

There is some discussion here regarding the matter:

Swather steering without WAS Feature requests

Would it be possible, or has anyone setup a swather to steer without using WAS. Maybe use feedback from dual antennas?

The back wheel is no good for a steering sensor. Being that it’s a caster, it amplifies every movement of the machine. Furthermore, the caster pivots 360 degrees. I believe it should be possible to calculate a synthetic steering angle using differential speeds of the two drive wheels.

Another method could be just to measure the angle of the steering wheel. Center never changes on a swather. I believe the factory option for autosteer on the swather puts a steering angle sensor on the steering linkage under the cab.

The question I have is does the equivalent steering ratio change with ground speed? In other words would AOG have to alter steering settings as ground speed increases and decreases? I want to explore this in the future. I hoped to look into it this year, but too many things going on.

Thank you! I missed those threads, some good information there

The angle of the steering wheel is an interesting idea, it might work. We will see if there ends up being enough time this summer, but if I get the chance ill look into this idea more. Thanks!

The trick will be to figure out how much steering wheel turn is required. Calculate some kind of synthetic steering angle based on speed, as I think the sensitivity/ratio of the steering changes with speed because of the differential steering, but I could be wrong.

My swather has a speed sensor on one of the drive wheels, but I’m pretty sure there’s a spot for a sensor on the other wheel. Maybe one could jack the machine up on blocks and figure out what happens to the steering at different hydrostat positions.

Swather autosteer with AOG is definitely on my radar and something I’d like to do. All my other machines already have their own steering systems that work fine for now…

It seems to me that speed does not matter if we consider the relative speed between the right and left wheels.
(-V left) + (V right) = scratch angle.
I think, however, that you would need an accurate halotron sensor with high resolution.
With a 3m track width, a turn of the machine by 1 degree will give only 5cm on the wheel circumference.
The circumference of the wheel with a diameter of 120cm is 376cm if divided by 5 it gives 75 pulses. But I’m not sure if that’s enough. You could probably use an even higher resolution.
It would be best to use a sensor of this type: 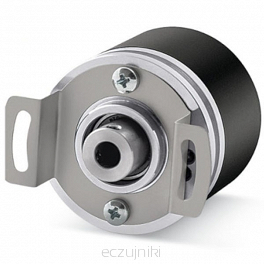 You’re correct, but the issue is to steer the swather we have to move the steering wheel. How far to move that steering wheel (or how fast to move it) may depend on the speed because the speed and steering are linked together mechanically on these swathers. Steering takes away speed from one side. How much it takes away might be proportional to the speed, so the PID loop for steering might have to be adjusted at various speeds. That’s why I’d like to jack up my machine and actually do some measuring of the steering ratio at various speeds.

We trialed installing an AutoFarm onto a macdon swather years ago. Installed the wheel angle sensor between the two hydrostat pump arms, work pretty good at the same speed as the calibrations were done. At any other speed not so great, as torriem said, steering angle does change with speed.

We mounted a WAS to the bottom of the steering wheel. It worked pretty good at the calibrated speed with an AutoFarm 5001. I had to rig up a valve output signal converter/driver for the friction drive steering wheel motor.

How linear is the effect of speed on the effective steering angle?

You could put the steering angle on the steering wheel and add an algorithm to the Arduino to adjust angle sent to agopengps based on speed.

That could be done on a separate chip, sending a modified voltage from the angle sensor to ADC on the PCB if you wanted to keep the PCB nano running standard versions of the code.