I just got my autosteer hardware installed. I have some difficulties to get it to follow the AB-line.
Version is 5.1.4, GPS is simpleRTK2B-F9P V3 @ 10 Hz.

First I noticed that my BNO055 IMU-board gives randomly bad heading values. Even if I set IMU > IMU GPS > GPS all to to 0 - 50, the heading jumps randomly. I ignored the headings value and set it to constant 0. The lack of IMU heading value must have some effect, but how much? Roll value from BNO055 is fine.
At first the performance was terrible. it was like really bad drunk driving. A lot of tuning with Stanley and Pure Pursuit settings and I finally got it to follow the AB-line. Increasing motor speed helped a lot. Too much Propotional gain caused motor to go full speed back and forth. It’s doing ok for low accurate work. I just would like to have a little better performance for seeding. There is still slow wobble over the line. About ±15 cm at 15 km/h.
For Stanley I have 0.3 Agressiveness, 0.4 Overshoot Reduction and 33 Integral.
Pure Pursuit, 2.5 Look Ahead, 2 Look Ahead Speed Gain, 78 Integral.
I found that Stanley is performing better than Pure Pursuit.

What settings do You use for Stanley and Pure Pursuit.

What is the difference between Fix and VTG -Antenna type?

Don’t use bno055, it outdated and maybe not supported at all with v5.
Buy bno080 or cmps14 instead, place it near the seat, better over the pivot point, you could make a standalone usb/ethernet version with cmps14/bno080 and arduino.
If you are using a single antenna setup, put your GPS antenna on the hood instead of the roof increase performance a lot!

BNO055 doesn’t work with v5 and BNO085 doesn’t give random jumpy headings unless it’s not fixed down properly or something else is very wrong. Settings you are using are odd. Very low aggressiveness and overshoot.

To me there is something fundamentally wrong somewhere. Should work ok ish with the initial settings. Until you’ve found out why your imu heading is all over the place I wouldn’t bother messing with anything else.

GPS position is 330 cm in front of rear axle about roof height. When I first used GPS guidance I noticed that it is better to place GPS as far front as possible.

I was searching settings from far end to other end. I’ll try what happens on higher aggresssiveness and overshoot.

You definitely should use PP with V5
Set fix to fix trigger distance very high, like 5 m and then reduce later.
You have increased motor speed, but maybe still too slow (if fix trigger doesn´t help)

Setting the GPS that far in front of the pivot axle, you will find it better in Stanley. But V5 works best with PP. Move the antenna much closer to the pivot point when use PP.

I have done some testing while seeding. Maximum value for agressiveness and overshoot reduction is around 0.5. Any higher will increase overshoot. Decreasing integrate from 33 to 15 didn’t make big difference.
Performance around 8 km/h is good. About 15 km/h starts to oscillate quite bad.
Motor speed is quite low, so motor shouldn’t be an issue. All corrections seems to be late.

Guidance on outer contour curves is too far out. Could it be because of GPS placement so far front?

What is your wheel base set to?

As a simple test, try to trick it by making your wheel base larger for the curve.

I think I found one solution. Steer angle measurement for maximum steer angle was about 20 degrees. I thought it was low but entered counts per degree to 57. Now remembered this and set counts per degree back to 100, which I think is much closer to truth. Motor is much faster now. I could increase agressiveness and overshoot reduction to 1. I can now increase speed up to 14 km/h.

Mr. Kent, I have a problem like this; When I measure the wheel angle with the iPhone compass, it turns out 29 degrees, but when I press and rotate the rec key with AOG in the same direction, it turns out 20 degrees, whereas 29 degrees is the actual value.

When I press the rec button on AOG, it draws a full circle, but it shows the wheel angle 20 degrees.

The circle recorder based on wheel base. Longer wheel base when recording will give you a tighter angle. I’ve not looked into that part of the code, but I will and see if it is limiting it.

Hello what does the fix2fix trigger mean? and there also can be set values for forward and backward? Can someone explain the singel antenna settings in V5.2.2 for fix?

Fix to fix mean distance between fixes to determine heading.
The manual does not say that specifically, it say “recognizing movement” 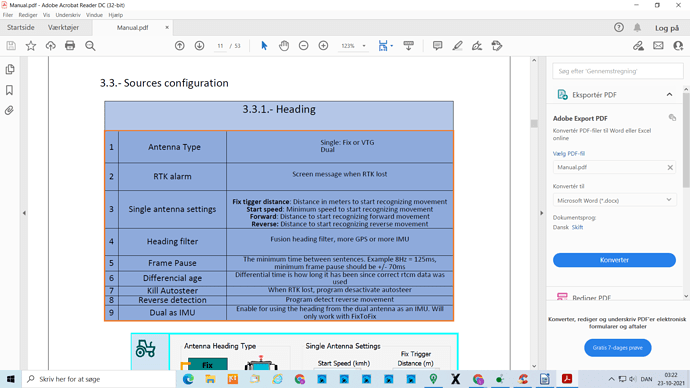 In ver 4.6 forward and reverse was not there