Has anyone seen their CMPS14 go directionally crazy as if it doesn’t know what direction it’s facing? It happens randomly. I’ve had it happen on 3 different units all running same specs pcbv2 with cmps14 directly mounted to mma slot. I’ve seen it with version 4.3.10 and now I just upgraded one system to v5 and it showed up there also. There seems to be no really clear cause. It Will happen one direction and then on the return pass nothing. I can go several rounds with no issue at all also. It’s like someone starts flipping the the board up side down and In circles. I’ll try and upload a video.https://youtu.be/06X1koYqXlc

Pcb is mounted in a John Deere 4640 on the floor to the right of steering wheel. I’ve also seen this happen with the pcb mounted to the left of seat in a 7710 John Deere. 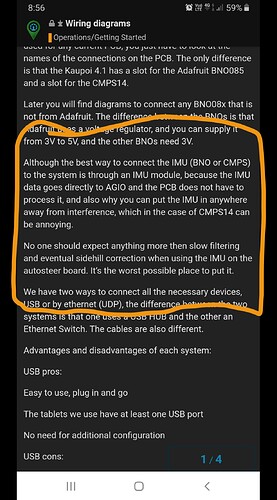 Yeah I have a spare nano sitting around I’ll get it off the board and give it a try. Thanks.

Did this solve your issues with the CMPS14?? I have a few to hook up and am trying to decide if I should wait for a BNO or if we are still trusting the CMPS14 ??? Thanks

I had a similar issue and solved it by just throwing a piece of faraday cloth over my cmps enclosure.

I plan to mount cmps in its own enclosure on the roof of the tractor.

Then you should probably be fine. If you do happen to get interference somehow though the faraday cloth is a cheap easy fix.

I did get it working. I removed it from the MMA slot on the pcbv2 slot. I put it in its own enclosure behind the seat with a separate Arduino as suggested above(I’m all USB connection). I’ve been using it all season this way with good results. Depending on the accuracy you are looking for you might not want to get the cmps to high off the axel from what i’ve read could accentuate the roll angle? maybe someone else could weigh in on that?

Can we clarify this as, from what I’ve seen, many here are just taping the BNO08x to the PCBv2 board?

I have done the same and it seems to work well, but have always wondered about such a sensitive device being so close to the circuit board.

Is the consensus here that it is best to completely isolate the IMU from the circuit board? IIRC this applies to the bare BNO08x chip, but not to the purple IMU boards bought from China or the adafruit boards. These full boards are more tolerant.

Or have I got this all wrong?

The BNO08x is also equipped with a magnetometer and i thought it was still used when using a bno? unless theres a new way to set it up to use without the magnetometer i’ve missed? which is very likely

The game rotation vector is an orientation output that is expressed as a quaternion with no specific reference for heading, while roll and pitch are referenced against gravity. It is produced by fusing the outputs of the accelerometer and the gyroscope (i.e. no magnetometer). The game rotation vector does not use the magnetometer to correct the gyroscopes drift in yaw. This is a deliberate omission (as specified by Google) to allow gaming applications to use a smoother representation of the orientation without the jumps that an instantaneous correction provided by a magnetic field update could provide.