Distance Sensor instead of WAS?

I was just looking at the front axle of the tractor I am setting up AOG on, and didn’t find an easy/simple place to put it. Would it be difficult to put a distance sensor on the tractor pointed out at the tire and then calculate wheel angle by using that distance in relation to the pivot point of the wheel?

That sounds an awful lot more complicated to get reliable!!

I guess you can use a ToF laser sensor but I think it would still require some bodging and you’d need to compensate for the middle axle roll/pivot if really mounting on the tractor. Also, is there a chance even a laser would be affect if clods/dust/occasional debris is getting thrown up?

Can you not simply bolt a clamp on or even use big zip ties (assuming you don’t want to weld a bracket on to the axle)?

A totally different “optical” option I briefly toyed with to avoid wires and because I didn’t have a suitable potentiometer handy:

However I think the idea is feasible.

For completely other toppic relative to distance measurement, I use
SHARP GP2Y0xxxx (available on Farnell)
There are several ranges : 40cm, 55 cm, 80cm,150 cm
It returns an analog non linear signal but works very well (at least in my case).

But as Alan says, I doubt about accuracy and prefer to put a potentiometer
somewhere even with non linear response and to linearize it afterwards in the nano.
I recognize that sometimes, you need imagination for installing this pot …
francois

With some careful thought, and as you say, imagination, a reasonably linear output can be produced with a pot / hall sensor. There is pretty much always a linear movement involved in steering and there is no real necessity to get involved with ackerman issues.

I guess I didn’t even think about the up and down movement of the axle if it was mounted on the frame of the tractor. It seems like this would be possible, but a bit more involved than I would like to get, as well as probably not as accurate. At this point it would probably be beneficial just to get more creative with the mounting of my WAS.

Hello,
Has anyone never used a linear distance sensor put in parallel to
the steering cylinder like this one : 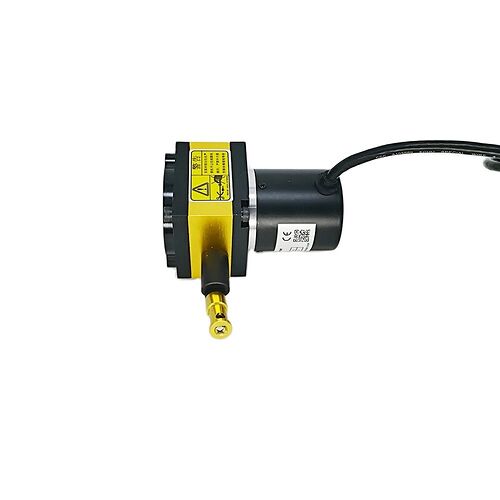 It 'll be easy to install, 40 cm of displacement could be enough (60 is available)
And all outputs are possible, voltage, resistance, canopen etc …
francois

many modern units have a centeral double ended cylinder that is also the track rod. This is perfect for balanced relatively linear sensing.

Not exaclty the same type of sensor than the one you linked, but this guy used a linear displacement sensor: Exactly the issue I had and I re mounted mine in the same position as his.