I did some more testing this afternoon and I said wrong before. When driving around the circle driving counter-clockwise, when going south, the vehicle is right of what I believe would be center. Clockwise, going north, I am right of center. East and west are center either direction of travel.
Also, I put this setup in my 7330 hi crop and tested it, without rtk . Still waiting on radios. I have been struggling with this tractor from the start. It has 320/90R46 on all 4, and on 30 inch row spacing, so small bumps really cause a lot of roll. This has caused me to try a lot of settings including the numbers in the kalman filter. Still terrible results. With Matt’s setup it dialed in right away and drives well. I tested it in some milo stalks today that were planted with Trimble and rangepoint, other than the drift, it is as good. Is the roll so much smoother because it is calculated before it goes to aog, therefore reducing the lag time ?

Edit
I tried to connect rfd900 radio today with no success. Connected TX of radio to TX of xbee on MB. Still shows 3D in u center. Tried on the rx pin, and it kicks rtk of rover out. Anyone running radios on static base who can help ?

Edit
Still no rtk. Have rtcm3 uart1 and 2 as message in. Checked base and have rtcm3 output only on uart 1 and 2. Am sending over uart 1 from base . Baud is 115k. I changed baud to 460k since it is going to uart 2 on MB. Still only 3D in u-center. Tried connecting to rx1 and 2 on MB and rover at the last just out of desperation.
I have been using this setup on a single antenna for a while, tx1 from base to rx2 on rover with ublox c099 boards. Works well. But being ee are using tx1 and rx1 between ublox and esp32, and tx2 and rx2 between the ublox boards, it seems I would be giving 2 inputs to 1 rx pin. I have read the pdf files and I must be missing something. I haven’t found any connection explanations for static base.

After a lot of reading in ublox and here in the group, it looks as if the rover does not need to send rtcm to MB via tx2. So if I desolder the connection and connect my tx from radio to rx2 of MB I am believing I will get rtk ?

Edit
Nope. Got to have tx2 left to rx2 right to get rtk fix on rover. Everyone seems to talk about ntrip and udp. I have none of that enabled. I thought that was for wifi corrections from cellular, but I read where it is being used with xbee. Do I have to send corrections through aog to fp9 then back again to aog ? If so how do I enable aog to do so. Rfd900 radios have a USB cable where I can connect to my hub, but I have never used ntrip or udp ?
Also what messages need to be turned on at base f9p ?

Have rtk fix now. I thought I could send corrections at different baud than modules, but unsuccessful. My radios will only go to 115200, so I had to set baud in uart2 to same in both modules to 115k from 460k. Tested in the field and ran fine, but I’m concerned that data will pile up after a while.
Edit
Learned that rf design makes a 900x radio that will communicate at 460k baud. Have some on order.

115k is more than enough for rtcm3 messages. You won’t have any problems. Most radios have two different baud rate settings. One for the RF link and one for the uart. My radios are Digi Xtend hopping radios, and they use 115k baud on the radio link, and I use 57600 for the uart (speed that the rtcm3 comes out of the ZED-F9P).

That’s what I was hoping to do with mine, but they only use single. I saw the xtend but didn’t see it had separate baud. What software for setup ?

Digi radios can be configured with Digi’s XCTU program. You need a serial adapter of some kind to connect it to a computer. Digi sells a little board you can plug the modules into for programming. I use the 9Xtend hopping firmware on my radios. There are a number of parameters you can set like the vid and hopping channel (to prevent collisions with other 900 MHz signals).

I looked at these radios. They are perfect for our application, aside from being 300 each. Wish I would have known about them before buying 5 rfd900"s. I also got the 2 rfd900x radios which work at high baud. I set them up yesterday and sprayed some existing 30 inch rows. They seem to work fine but it was my farm where the base is located. If they don’t reach the other farms, due to the baud rate, I will start ordering some of the Digi radios. Thanks torriem.

Actually the radios you would use on the roving GPS units are only about $50. That’s the XBee SX (900 MHz OEM RF Module | Digi XBee SX 900 | Digi International). Those can only transmit at only 20 mW, but a roving unit never needs to transmit, only receive. The SX Pro is 1 watt and that’s what I use for the base station. Those are $300 (Actually Digikey.ca is selling it for only $130 right now). Line of sight, it can reach 10-20km or more. They come with different firmwares, such as mesh. I reflash them to the 9Xtend hopping firmware using the XTCU software.

The only thing about these modules is they use the worst form factor ever. They are designed to be surface soldered to a parent board. Horrible design. For our purposes a socket is far superior, so you can easily replace the module if it fries, which is something I am wont to do sometimes. Unfortunately you can’t even buy the special spring headers that could make a socket.

I’ve been seeing slightly better prices for the Digi radios at mouser.ca than digikey.ca. Both have free shipping above $100/order. Make sure you select your appropriate currency.
https://www.mouser.ca/DIGI/Embedded-Solutions/Wireless-RF-Modules/RF-Modules/_/N-6sri4?P=1z0j0b8Z1z0vpzkZ1z0zlfiZ1z0x0en

@torriem Have you found a good parent board with v regs and IO level converters? One way around the lack of a easy to swap header would be to use a small cheap intermediate board with a header and mounting holes that then plugs into the actual parent board.

No. I’ve only been using the Digi radio with Sparkfun RTK boards, which are already 3.3v. I’ve just been soldering wires to the contacts for that. The one I use for a base station is an older model of the 9Xtend, which has a standard 1mm pitch 20 pin header on it, so that’s easy to work with at least.

I found a board someone designed that converts it to a more standard form factor, but I don’t know where to source the special spring pins it would need to make the socket.

I was thinking of soldering the radio to the intermediate board and it would become a throw away if it got damaged. How about soldering pin headers to the radio instead? Is it an uncommon pitch?

It’s 1mm pitch. But I’m not sure the three sides line up perfectly on the 1mm square pitch. 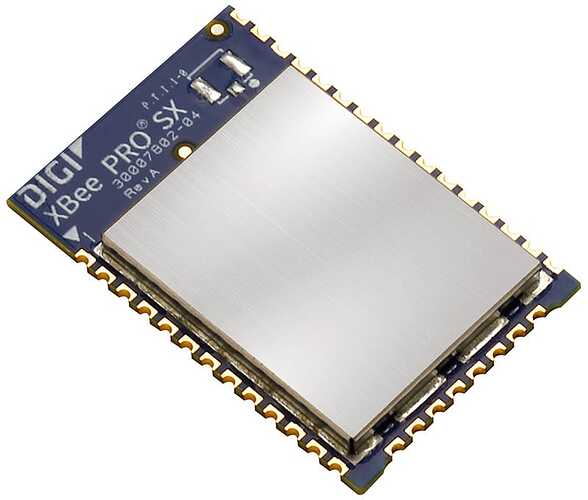 Really, though you only need 4 connections. Gnd, Vcc, TX, RX. They are all together on the left side, near the antenna side of the board.

I’m thinking to securely mount them they need soldering to a board with its own mounting holes.

Any idea why they are called “XBee Modules”? They don’t match the XBee footprint at all.

Edit The normal XBee footprint is called XBee TH (or THT) and the Digi SX radios use XBee SMT.

I have the mid-range radio from digi.com and it sits directly on top of the SimpleRTK2B board xbee connector.

Do you know the radio model number? This one doesn’t look like it would fit.

Here’s the full manual for the XBee SX RF modules.

So I’m thinking it should work to solder a 2mm pin header to the SX and plug it into any standard XBee socket.

Just a hint for those from Europe: Buy modules in the 868MHz range (instead of 915MHz) for legal reasons with the appropriate antenna. I didn’t look for details, but normally all manufacturers have these two variants of the same product.

Seems mine was actually the long range product (not the longest range “extra long range” product).

But I bought it via Ardusimple and I see now that they must have added the connector board: 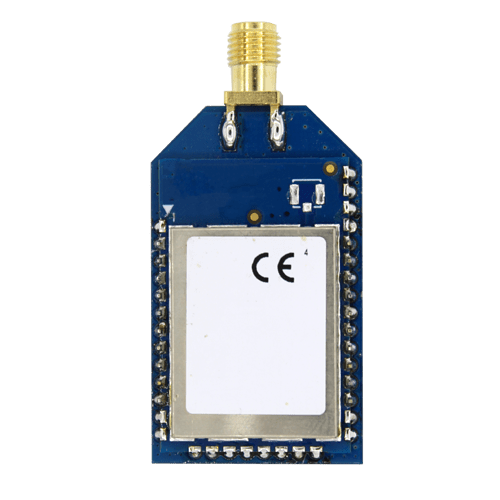 Ardusimple's Long Range Radio Module uses an external antenna to reach from 10 to 14 km, depending on the region of operation.

For my purposes I’m not a fan of the SMA antenna jack they are using. I’d rather use an SMA pigtail and put the SMA jack on the enclosure itself. I’ve had bad luck with SMA extension pigtails. They tended to be slightly out of spec and the center pin would push in, shorting out the pigtail.