Has anyone decoded Claas joystick buttons?

Hey thought I would ask if anyone had decoded the canbus messages for the buttons in the cab from a later model Class tractor; a 2017 Xerion specifically?
I see it has been successfully done on Fendt, with a mcp2515/Arduino.

I Have decided the sequence management buttons on a Arion stage 5. Xerion is a different beast so would expect the messages to be different. Xerion joystick would be similar to the combine and I know the joystick buttons are just simple normally open switches on them. They are easy to read the digital signal at the joystick and could use a relay to trigger from aog.

Evening all, Been fitting up autosteer to my combine, and have wired the enable line into the handle’s currently redundant autosteer button. I’ve attached an excel file of the pin mapping for the DB25 connector. There is a common +5v rail, most buttons are push-to-make, except header ‘soft stop’ which is push-to-break, I guess for safety. LED+ is 5v, LED- and GND are common. There are 3 special buttons which I believe exist on later versions of the handle (units with touchscreen Cebis), func…

Probably will be similar to this? No idea on the canbus codes it creates but if you just want to know the button state it’s quite easy to rig something up

Hello @RGM, i am searching for the can Messages of the Claas Joystick (C-Motion). Maybe your decoded Adress off the sequence Management buttons can help me to decode the other Messages.
I have an Claas Arion 660 (BJ. 2017)
Which CAN ID and which CAN Message have you for the sequence Management buttons decoded?
I know that the control unit of the armrest (MFA 100) is connected to the CAN 2 Claas vehicle CAN Bus, so i read this BUS at the OBD Socket with an MCP2515 and an Arduino.
Thank you for your Help.
Best greetings from Germany!

Here are the CSM button messages i have decoded, your tractor is a T4F i think and should be the same as the St5. The Axion A23 ones are for the older ArionT3b/AxionT4 with the older non touch CEBIS
They are in Tony’s @CommonRail Teensy CAN ino.
I was only interested in these messages at the time so never looked for anything else. Let us know how you go and if you find anything else interesting.

Yes if I found out more addresses, i will let you know.

Maybe you have a Tipp for me how to find the other ones? On a Fendt S4 I decoded the Go & End Buttons with tracking the K-BUS and press each Button 10 Times, after that I put the Datas in a Database and looked which CAN Message was there 10 Times.
Is there an easier way?

I found the ID the same whatever series 3b or st5 just the data sums to be different.
As for working out the messages, I have used the same way as you but also with arduino and mcp2515 you can use this can sniffer GitHub - adamtheone/canDrive: Tools for hacking your car
I have found it useful as it sorts the messages and hylights new data and you can just save the messages to a decoded list. There is some way to get it to send messages but i didn’t get that to work. It took a bit to install and make work but if you follow his video instructions it’s not too hard.

Hello, is this right place (right side of seat) to search can2 on claas arion 650 Cebis A37 2016? Aim to access the can bus to enter headland button messages. 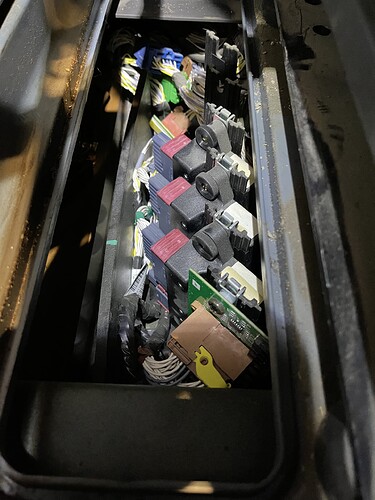 If your tractor is steer ready there is the ATP A009 module in that area. On its 6 way connector there is the tractor can and steering can. That’s where I have connected. If you don’t have a steer ready tractor with ATP module you can use the obd2 diagnostic plug behind the seat.

Thanks for the answer. This is no steering ready Tractor. Steering will be analog with Cytron.

Just thinking, can I use Kaipoimodv4.1 board with nano and udp setup with Can-shield to send these CSM button messages ton Can-bus 2.

From what Tony said, the nano doesn’t have enough memory to run can and udp. That’s why the teensy is used. To do what you want the new all on one board would have the hardware to do it but there hasn’t been any code written that I know of that will steer with cytron and also connect to can at the same time.

Maybe this needs a separate nano to handle can messages. Ugly solution but better than soldering directly to the c-motion handle.

Is there any code available that takes advantage of those messages you decoded. It would help to make a simple can-input box

I don’t have any code other than what is in the teensy canbus. I do remember editing the tractor simulator uno code to send one of these messages instead of the autosteer engage message to confirm I had found the correct message.
If you have digital outputs from aog then a uno/can shield could read these and send the message. Would still require some coding though.