JD systems having problems in UK 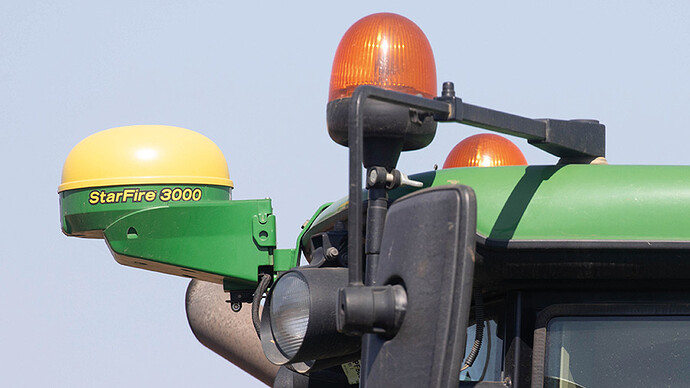 Brief synopsis:
4G phone systems are interfering with SF3000 and older 6000 systems in the UK.

On The Farming Forum UK someone had more detailed info from a JD dealer and they blamed 5G. It all is quite confusing. Some comments say it is the JD satellite based correction signal frequency issue. Sounds like their front end receiver filtering is not sufficient against the new 4G/5G frequencies?

The JD mess does not seem to be limited to 4G/5G interference. They have released some mandatory SW update and the update seems to fail most often, bricking the receiver and the only option left for farmers is to purchase a new JD receiver.

I have not seen complaints about other products but I’ve seen some quite odd performance issues with the Topcon AGI-4 receivers too. It started before 5G deployment a few years ago. During periods of very low number of satellites (GPS + Glonass), the receiver may start to cycle shortly from RTK fix to float even on an open field. A few seconds on float and a minute back on RTK. It could be second harmonic from a 4G base but I have not found which exact frequencies the local 4G cells are using. Nothing like this happened earlier on, not even at more challenging fields.

F9P running on GPS + Glonass (so far my base only supports GPS + Glonass) hardly loses RTK fix even when running between farm buildings (at least as the SimpleRTK2B reports to AgOpenGPS). A significant difference anyway and wonder how the F9P would work if I’d put one as a base and running 3 or 4 constellations.

If you look back / remember in my project, I had no end of issues at the beginning, before I was using F9P’s, I was testing the system with my SF3000 reciever… As it was already on the tractor and a known good GPS source… Yet everytime I would fire up my tablet setup, id look SF1 and accuracy would go down the drain… after far to much wasted time / frustration, it turned out to be the USB hub i was using on my tablet! And have tried multiple other units since, all doing the same, literally the second you plug it in, you loose SF correction signal totally…so there obviously very sensitive to something…

A friend of mine had a huge issue with a Topcon system. After a lot of changing parts, another receiver and hours of diagnosis by the topcon dealer, it turned out to be the slide out screen stereo he had in his cab.

I have a USB3 hub that not only messes with AOG but actually affected the 716 systems that much it constantly blew the fuse associated with the linkage. I tried the same hub in my 724 when it’s hub died and AOG was all over the place in that too.

Sounds like no one knows what’s going on and John Deere doesn’t seem that interested in finding out. I’m a bit skeptical about 5G, but on the combine forum a longtime user complained recently that every time he talks on his 2-way VHF radio, the 6000 loses all GPS signal until he stops talking. Never happened before on a 3000 or ITC. So this combined with these other reports of problems in the UK suggests to me that the 6000 is just a poorly designed receiver and is easily overwhelmed by local interference of a variety of different kinds.

If a mandatory update on a new receiver bricks it, there’s no way anyone should accept that the only solution is buying a new one.

Wow that’s interesting, @Alan.Webb. A GPS receiver should be able to reject local interference of that type. Besides the antenna is above a ground plane on the tractor’s roof. Wow commercial units are getting shoddy!

Wow that’s interesting, @Alan.Webb. A GPS receiver should be able to reject local interference of that type. Besides the antenna is above a ground plane on the tractor’s roof. Wow commercial units are getting shoddy!

That system has the older (better according to a topcon dealer) AGI-3 reveiver too.

What if we put in a f9p with ardusimplertk2b on it??

Would that work with John Deere??

Yes if you figured out the CAN bus protocol enough to pretend to be a Starfire, Autotrac doesn’t particularly care what kind of GPS signal is feeding it. Starfire’s have integrated IMUs in them, and the GPS position is adjusted for the roll of the tractor before it leaves the receiver. All of that would have to be done on a microcontroller.

Or if you could figure out the protocol to talk to the SSU then AOG could directly drive any autotrack-ready Deere, which would be the most ideal. The SSU integrates the hydraulic steering valve, the wheel angle sensor, engage and disengage switches and sensors. AOG could theoretically just tell it what wheel angle to set and it would do it. I’ve spent some time recording messages to the SSU, but so far have only uncovered a few things I can make sense of.

No yellow wheels around here to play around with

Yes if you figured out the CAN bus protocol enough to pretend to be a Starfire,

Would a teensy4.1 CAN bus ‘man in the middle’ be able to help with this?

Yup. That turns out to be quite easy. The only thing is you need the GPS position to be compensated for the tractor’s roll before you inject it. So I’m following @nut’s work on getting a good yaw heading out of GPS and the IMU, and then I’ll use the roll from the IMU to calculate the adjusted GPS position.

I had a look at Franz’s Dual code for roll and it looks reasonably portable . Obviously requires heading.

Getting a good tractor heading is where @nut’s filter comes in when using a single receiver, which is what the Starfire does internally. Then it’s a simple matter of using some trig with the current roll. Just like AOG does internally.

I’m now hetting forward with the OpenIMU300 as well, there it’d be easy to feed GPS in via RS232 and send the corrected signal out to CAN. I’ve done quite some reading of the Aceinna source code and the filter is a basic Kalman filter but there’s some filters and different operational modes, resets of the filter etc. You port that to BNO08x as well, or then just use the OpenIMU HW which should be one step upgrade, and not too expensive either.