I was wondering if anyone has worked on any projects related to controlling the throttle and PTO remotely? I was thinking a remote control linear actuator would work fine for the throttle. Also could you do either via CAN? Just wondering if anyone had any experience or a good starting place. I would be implementing this on a JD 6430 running a grain bagger. Currently using a stripped down version of AgOpenGps for auto steer or in this scenario “straight steer” so not using gps. Just using a WAS and 12V DC motor.

@torriem is working on this via canbus. Unless you know the canbus codes or can determine them, hack them etc, you’re kinda out of luck.

We have a button on the fender for pto (factory) and run a stiff wire the goes out the cab to control throttle. Just allows remote movement of throttle from outside behind. Used with Big auger. Not high tech - but works.

Some things on CAN bus are momentary messages, like moving the hydraulics. Other things are continuously sent messages. I haven’t looked at any of the messages yet, but I believe I’ll find that throttle position and PTO would both be continuous. Thus you probably can’t just blast out messages on the bus to override them. But if there’s a bus link between the controls and the rest of the tractor it is possible to insert a device in there that passes CAN messages through, but overrides certain messages with your custom values.

These days nearly all controls are just POTs or hall sensors. I’ve replaced the throttle POT on my tractor before. That’s a pretty easy place to tie in. Some kind of relay to switch the POT out and replace it with your own analog signal. Matt Reimer took this approach with his autonomous grain cart tractor a few years ago.

Same thing for the PTO. It’s just a switch usually, so you can override that with a relay (remember safety).

Whether CAN or tying into the analog components, I hope to put something together this summer to remote control the PTO and throttle. It would great also if the microcontroller could monitor engine temperature (CAN probably) and shut the tractor down after it’s cooled off when I’m done. Even just buttons on the fender like Brian has would be a big improvement.

As always safety considerations are paramount. Some kind of big kill button, a dead man switch of some kind.

On the NH T7, you have to push and hold for 3 seconds and release, or it either stops or never starts. Safety is job 1 apparently, ugh

Saw a smaller NH the other day with the most ridiculous shuttle shifter I’ve ever seen. You pull it towards you and click it up or down to go into gear. But then it goes back to the center position. The way you get back to neutral is pushing a little button. Apparently the whole thing is super finicky and breaks easily. $500 touch. If it were my tractor I’d try to design something on the 3D printer to make it a more normal shuttle shift arrangement. It’s just a bunch of switches inside.

Had RME come out and go thru our case 500 as was private purchase. First thing he said was be very very light with the shifter. Breaks so easily.

Let me turn on.
He deals with amateur tractor diagnostics. I have a texa navigator interface and a lot of service documentation, from what I noticed is that in MF Case or NH it is possible to connect several throttles to the engine ECU, in the djagnostic program I can choose which is to be the primary one.
As for the reverse lever in NH and Case, I had a problem with her at home and bought a new one, but before I did it, I broke the old one, it had magnetic reed switches. After properly connecting the cables, I was able to start the tractor and switch on the crate.

I have been reading up on CAN-Bus sniffing. Would it be possible to use a seeed studio CAN-Bus Shield V2 for Arduino to sniff out what is happening on the tractor CAN-Bus? Then mimic the signals we want to send back into the system. I just made a relay box to control my hydraulics, but this would be a much nicer way and in the process gain access to many other parts of the tractor.

An Arduino with a CAN should works best if you’re looking for a particular set of filtering parameters that you can set on the CAN shield itself, which reduces the amount of data you need to receive on the Arduino via the UART. The problem with doing general sniffing this way is that the Arduino UART has a limit to how fast it an take data from the CAN shield and most CAN buses run at speeds greater than 150 kbit/s. My tractors run at 250k.

For me the best way to figure out a) what’s on the can bus and b) what’s likely going to the device I’m interested in and what it means is to make a CAN bridge. That’s a microcontroller with two CAN interfaces on it. I can then physically break the bus, and insert my unit such that it’s connected to both sides of the bus, and then use a simple program too pass the data through, printing out things that look interesting or trying to modify certain values as they flow across.

For example, my PTO and throttle controls are all on the tractor’s armrest. And I know there’s a dedicated controller in the armrest that talks over the bus to the rest of the tractor. Thus if I put my sniffer between the armrest and the rest of the tractor, I can get a pretty good sense of what’s coming from the armrest rather quickly (anything that originates on that particular CAN interface). And then I can modify data and see what happens too. Since in this case I want to override the manual controls, modifying the data is the best way to got. That way I don’t have to try actually be a CAN ECU. I don’t have to know all the handshaking that I’m sure the tractor uses. I just look for the message that contains the throttle position info, and modify it on the microcontroller per inputs from elsewhere.

I started CAN sniffing (sounds habit-forming) using an Arduino Due with a dual CAN transciever shield on it. The Due not only can natively talk to CAN, it can also work at megabit speeds over USB so data collection is pretty straight forward. Without any filtering I can capture in human-readable form (sort of, it’s hex) the contents of every single message that flows on the bus in either direction, at 250 kbps.

I just received an awesome little board from an outfit in the UK that’s smaller, and based on the Teensy 4: http://skpang.co.uk/catalog/teensy-40-triple-can-board-with-240x240-ips-lcd-and-usd-holder-p-1585.html

I think I’ll be using Teensy 4 for any project using CAN from now on. It’s such a capable board and way smaller than the Due.

I tried in the gleaner to do some yield monitor sniffing, plugged in a working dual can due just to monitor, and the whole canbus freaked out and said canbus error. Turned combine off and on and was ok. Sheesh.

Yes termination can cause problems! CAN busses are pretty robust and in my experience the ECUs on them are pretty fault tolerant also, and can recover. I’ve caused quite a few errors on my tractor, but nothing that stuck! Breaking the bus and inserting a bridge in there (with termination on each port) seems to work, as long as the traffic is flowing across. Some ECUs get cranky when they don’t see the messages they want to see!

I plugged into the service port actually - designed for just that sort of thing - yet still it freaked i’m assuming because it didn’t send back the right codes. Tried with and without termination, short wires, even powered off completely, still same error

Yeah I dunno what’s going on there! I haven’t tried listening on the service port, but I should try it some time.

I’m trying to do a similar thing with a common rail engine on a pump,ideally I want a couple of pre-set engine speeds controlled by a remote control,currently the engine is in a truck and I want to simplify the wiring without using the truck dash etc.

Do you know the engine manufacturer for your pump generally the CAN message TSC1 will allow the control of the engine speed.

My engine is a Cummins,seen them run with just a +v lead on YouTube.

If it is Cummins and ECU controlled then it will respond to the TSC1 message, I use it on the QST30 engine, if you know the model I will see if I can find the information.

Someone has figured it out… 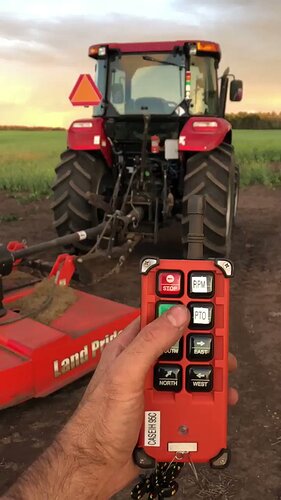 @
#aghack Remote Engine Start, PTO, RPM, Auger swing and winch. #abag #harvest20 #peacecountryag DM for install price, these are full custom units, you can have it control whatever you wish.
1 Like
Stabilo August 19, 2020, 3:59pm #20

This is the product that you need.