When using auto section, AOG appears to have zero tolerance for sections crossing the outer field boundary. This is quite understandable. When using a 12.00 meter boundary curve and a 24.00m sprayer for example, if everything is dead straight and online then all the sections turn on. However slight curves in the boundary or the sprayer being a few cm offline can often cause the outer section to turn off, creating big misses. 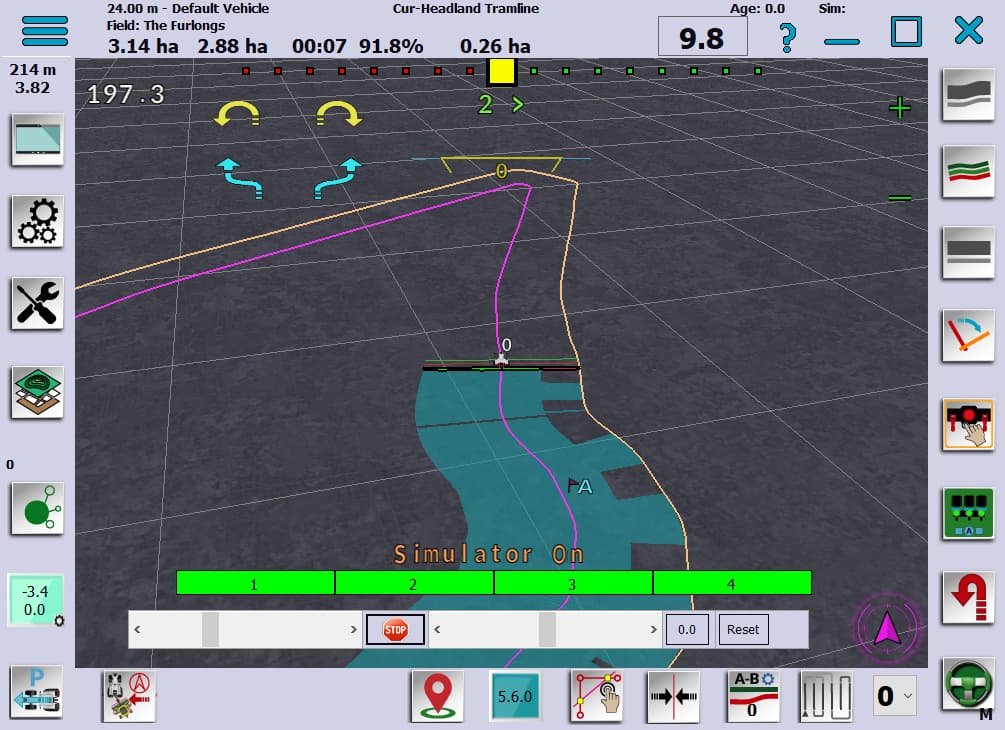 The Trimble system I use has two % Coverage settings, one for in the field (e.g. 90%) and another for against the boundary (e.g. 5%). I haven’t see anything in the GUI to allow a little bit of boundary over spray. Is there anything in the backend of the code which would allow some overspray?

Is there a better solution for this with AOG? One I have found so far is to move the boundary curve about 20cm further into the field, creating a slight spray miss almost all the way around the edge of the fields. Another is to rerecord every field boundary 20cm further out.

We often do the laps in 1st, generally I put myself in manual to do the lap, or only the outside section

The problem here is that AOG is protecting your neighbour, with such wide tools when you drive around a curve, if you have the boundary at half the distance of the tool, it crosses the edge, and automatically turns it off.
Manual solve the problem for you, but not for your neighbour.

Interesting argument about protecting your neightbour but in this situation it seems a bit silly for a few reasons.

I have a grass margin around all my fields, between the AOG theoretical boundary and the hedge/ditch physical field boandary. It will take rather more than 5% of a 6m section to place a spray boom over anything I haven’t grown a crop on in the past.

I use the trimble for isobus disc fert spreader, and those missed sections of headland can actually cause it to throw fertilier into a ditch if not careful. Even with it allowing a little boundary overlap, there are still occasional missed patches where it has got too close to the boandry line (mainly due to non-rtk satelite drift). I spread headlands first with boarder vanes and reduced disc speed to limit how far it throws the fertiliser. When spreading the middle of the field and turning at the headland, the missed patches by the boundary can trigger the spread to turn on again, but this time at full disc speed and no limiting vanes in the way. It’s a pitty AOG doesn’t work with isobus yet as it’s Headland feature would be very effective at preventing this without having to manually switch section control off and back on again during a headland turn.

I have once had a neighbour unintentionally spray on of my fields, but their sprayer never left their field. The effect of wind drift is a far far bigger issue than the few cm over spray I am talking about.

Boundary is the limit, AoG can’t work in automatic mode out of limits.

I understand the logic.

The current sprayer can only 6m sections without changing the spray lines so having small outer sections is not possible for me at the moment.

Seems like the solution here is to rerecord AOG boundaries as hard boundaries slightly closer to the physical field bondaries.

Ah, I see what you mean now.

Saying to change the outer boom size to be smaller is silly, frankly. EDIT: Understood.

Definitely the boundary tolerance is an issue there needs to be resolved and a setting like Trimble’s overlap boundary percentage is needed, that’s for sure. One solution is to dynamically create a bigger boundary based on the real boundary. The offset based on the percent setting. But I’m sure there’s an easier way. I’ll read through the code again when I have a chance. EDIT: I’ve looked at the code and feel like it could be done in the loop that’s around line 1260 in Position.Designer.cs. It checks the left and right ends of each section against the boundary. One algorithm might be that if only one end of the of the section is out of the boundary, temporarily compute what where the end would be if the section were a certain percentage shorter, then check that. The original position of the left and right side of the section is computed around line 1152. Seems trivial enough to do that calculation again. I’ll flesh out some code this evening to see how it looks.

That is just a work around until it makes it into the code.

Set your tool wider when recording the boundary will also work.

I do wonder whether this is one of those issues which can vary a lot with different farming styles and practices around the world.

Possibly, but like the screenshot shows, zero tolerance for boundary crossing does not work in the real world when driving the headland, but it should.

Would it be just as simple to create a tolerance fence, created outside the boundary based on a user input of percent of total tool or a given distance? Then just use that for the check? It just builds that line on the boundary if not needed.

I plan to upgrade sprayer to have last nozzle from both sides single section 50cm even so it would be good to have % overspray, right now its annoying that it shuts down 3-4+m section for 1 cm of overspray. But making outer section smaller in AOG is good fix for now.

Yes probably. Would be least intrusive. 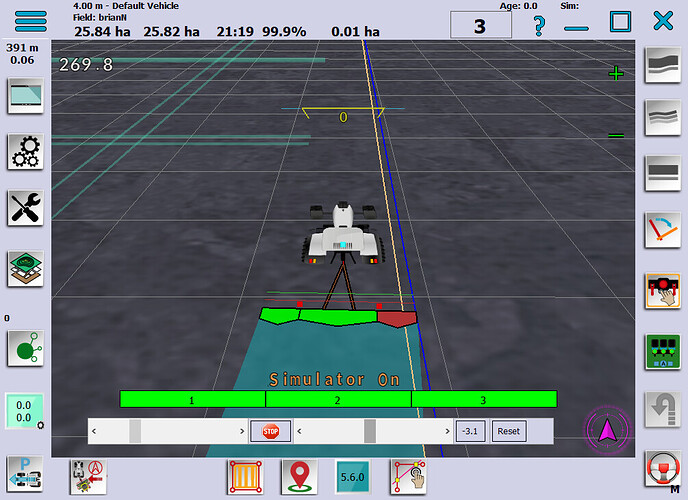 This is probably the best way to go. Looks good.

Another feature of the commercial systems involves when to turn off and on the section when overlapping. Trimble lets you set an overlap percentage. Basically the idea is how much of a section should be on unapplied area before it turns on, or on applied area when it turns off. With spraying of course that number is zero: the boom should turn on immediately when the edge of it enters unapplied area, and only turn off when the entire section is on applied area. But for other applications, such as seeding or applying fertilizer that might be set to something like 15%. I’ve personally never used this feature, but I imagine some do.

AoG has a setting for that in pixels. I don’t quite understand now to translate that to ft or m but it sets how much coverage you want.