Hello guys, I started planting corn and sunflowers a couple days ago, managed to plant for 2 days with AOG. First day tinkered the settings a bit from cultivating and got a beautiful straight line. Worked for a couple of hours and with no change to the settings it started oscillating, tried to change PP settings but only managed to make it worse. Today I tried again, found out that somehow my steering angle values changed even the degree per count is same, i.e. Full turn was 42 degrees, now it was 34 or something. Fixed that up, started planting on hilly ground got really good results, but after a couple hours started getting the same issues again. Moved to another field that is flat and it got even worse, no matter what I do with the settings can’t get it to go straight. Thought maybe the steering angle had problems again but this time it was fine. I also have a problem where I lose the zero position of the WAS, but that just shifts the line a bit, can’t figure out why it goes out of true zero.
I’m running a Panasonic fz-g1, PCB v2, cytron, phidgets motor. Antenna is mounted on the hood, bno085 imu. Could the arduino have problems after working a long time? Anyone have an idea?

Is your A/D converter loose in its socket, or the wiring to the WAS put together with butt splices?

I ask this because at one time it was working for you well. Hopefully you still have a save file of your last good config.

All soldered, will check the a2d. Tried differential mode today, worked fine, but after 4 5 hours of autosteer it starts oscillating. Can anything be overheating in the box?

I don’t think there is anything in the AOG board that can overheat, last year was using it in an open station and it was 32C out. I think it would have to be impressively hot in the cab to overheat.

The genuine Nano specs state it can operate -55 to 85C, the cheap Chinese ones I still think should handle -20 to 70C without any much effort.

If it seems like its good for a few hours then messes up, try shutting down and restarting the tablet. See if that makes it recover.

All soldered, will check the a2d. Tried dif

You could reheat the solderings to the ADS 1115 to make sure there are no “cold” joints.

What type of 7805 do you use? a linear or switching voltage regulator for 5 Volt

I’m using the one from the digikey shopping list, says it’s a linear one. Will try reflowing the joints and securing with hot glue.
@PotatoFarmer I tried restarting everything the first day and restarted the board only yesterday to no avail.
I will be changing the WAS when I have free time just to be sure, since it seems all it does is move me away from the AB line by a couple cms.
Going to plant today again, so I hope I can find the culprit.

says it’s a linear one.

If it is linear then you should add cooling finns to the one feeding the WAS. Linear type shut off power when too hot, then on a second later, and so on making shifting voltage to WAS. What is the excact number stamped on that part from Digikey?
Edit: if it is the 7805 feeding ads and nano, you will get about 3.5 volt out to WAS when 7805 shut down and power to PCB is only from “backfeed” from usb 5v
What else do you power with 5v from PCB?
I use linear 7805 and tried powering f9p from PCB 5 V, and noticed 7805 got very hot!

So no longer having issues. Things I have done - opened up the box, only relay was heating up. Put some hot glue on the ADS1115 to avoid any vibrations. My pcb is putting out 5v, so I guess the WAS zero changes because of the was itself, it’s a headlight level sensor from a BMW, it’s a second hand one too so maybe that. Got the same issue again when a worker had cultivated the field diagonally, via the same diagonal I had done it too, I’m thinking the tractor is too light, light front end and a bit too high tyre pressure, it started oscillating again and no matter what settings I tried it couldn’t stand on the line. Thought it was playing up but changed the field and it was working fine. So I will need to get a brand new WAS, and make sure the last cultivation is in the sowing direction until I get a larger tractor.
Can anyone help out with getting it back on the line when away from it? It starts turning like crazy and overshoots the line, turns the other way and overshoots again, then goes back on the line. If I’m say only 10-20 cm off the line it almost gets on the line perfectly, should I try the P% or look ahead?

Thought it was playing up but changed the field and it was working fine.

What is your numbers just above Tram?
This computer has no steer PCB or GPS but first number should tell Gps speed (10 and after snake you have time of frame rate(High is bad)

Yesterday on my tractor AOG ver 5.45 I had a similar issue, where tablet suddenly got slow (windows probably doing something in the back, (and I could not catch what) and the numbers changed from 10 snake 9(working good), to 5or 7 snake 18 and steering stopped working properly. (making at steer to left, waited 2 seconds and then steer right )
Restarted AOG and it worked again.
Some months ago I found that such a thing happened, when passing a neighbor who had a wifi (not even open) that my tablet tried to connect and windows started some security program update but obviously could not (and not a windows update)

Should add: My f9p gps is connected by bluetooth
Also this does not happen every day. 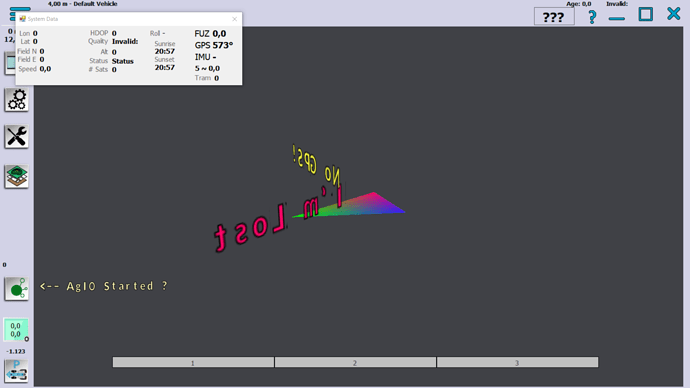 I can read in my own message that I probably need to do the CCleaner trick again!

I have seen similar behavior, on a field where I pass a neighbor who have wifi (locked with code) while I was using very stable 4G Hotspot on mobile phone. Computer went from around 10% (half AOG half agio) up to 100 %, every time I had passed the neighbor. I activated windows joblist and it turned out to be a windows malware update that ate the cpu power. I then used CCleaner to shut down unnecessary startup programs (including this windows security updater) rebooted and problem solved. Mu…

It’s good to know, but my tablet is on cellular, it’s an fz-g1, I thought about it being slow too but it responded instantly to everything when I tried, also have tried restarting to no avail. Last time I got the oscillations it was on a 2ha field, last 2 passes with the cultivator were done in the sowing direction and it held the line pretty good, even though I had moved most of the settings. Went to another 2ha field 150 m away cultivated in the sowing direction and had no problems.
Also I know the gps window but what do you mean by snake and frame rate , is it the ~ symbol? And what is it actually showing? By the way I’m running an hc-05 bluetooth on my gps as well, usb hub keeps disconnecting, tried the power management settings for the hubs and couldn’t make it work. Was told I need an active usb hub that gets powered via 220v so I wouldn’t get interruptions,

yes, numbers just above Tram. I found it now

10~9,5 means 10 Hz GPS signal coming into AOG and 9,5 ms between AOG frames.
So when I suddenly get for example 5~18,4 then AOG see/reads only gps signal at 5 Hz and computer only allow AOG to put out a new frame every 18,4 ms. which was not fast enough. to drive straight.

When you say cultivating in sowing direction, does that mean less side to side movements of cabin(less Roll)?
If that is the case, I must ask : what is your antenna height set to?
Mine is set to zero meter! Else my steering does snake a lot on rough land, (due to roll coming in wrong(compared to GPS) with the BNO085 mounted on the PCB)
I know, and can see long snake of sowing rows due to antenna side movements when tractor slowly roll from side to side along the field. But much better than with correct height set at 2,8 m

I still haven´t set up a PANDA board! which would make roll correct.

On another tractor (the CNH T6-175) we had usb disconnect often too. Solved by powering EVERYTHING from same 12 V spot. (problem was charger for tablet was from new line direct from battery. And pcb, F9p and active usb hub was from original 12 V GPS power line)
Meaning two different GND spots.

Thanks for the explanation I had no idea.
My antenna is on the front hood at 1.3m height and yes there is more side to side movement when it’s cultivated diagonally. I thought the roll filter would help but I think I increased it too much and it made it worse, I tried decreasing Sidehill per deg of roll but didn’t try the 0 height antenna. 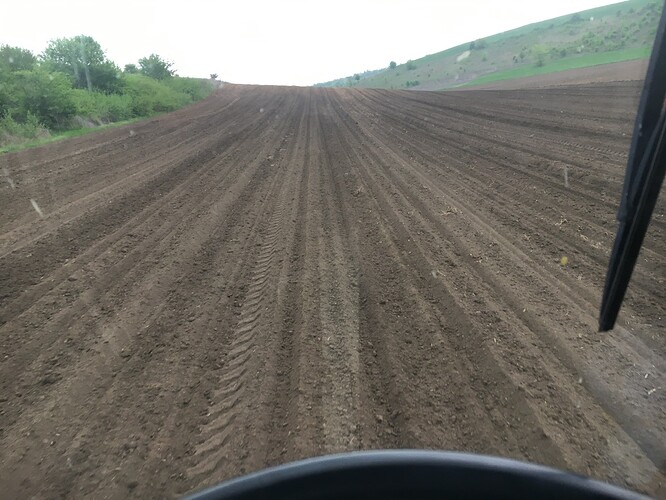 image1280×960 348 KB
I do need the sidehill compensation though, this isn’t my steepest hill, but it did a really good job, the straight line was lost only on my steepest hills, on which even my plough goes out of the furrow, can’t blame it for that, the tractor instantly loses traction and it can’t compensate, neither can I when driving manually.
My usb hub is a cheap hama one, but it usually disconnects when I start using the motor switch. Will try to power gps separately and only use the data transfer cables to see if that would help. I think stopping and starting the motor creates some kind of power spike and that’s why it disconnects.
1 Like