Hydraulic valve assemblies for Every tractor, for every type of hydraulic system

Does anyone know what the PWM frequency for the steering valve should be? In the Teensy ino there are three options in the user settings for autosteer 125Hz, 500Hz and 3,9kHz. 3,9kHz is standard setting. Also the PWMmin setting (where the spool starts to move) should be similar on all of theese valves independent of tractor model.

Thank you, i just need to get ahold of @baraki so i can get them ordered and paid for!

Thank you! I’ll try with these as soon as I get the AOG installation finished. 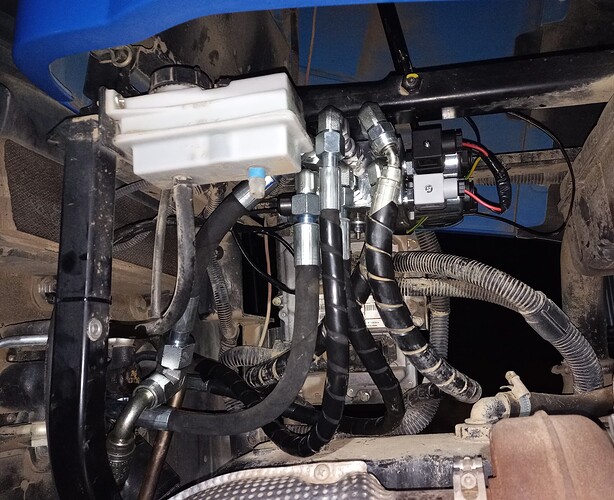 I have this valve connected to a steer pcb(kaupoi4.1) on my desktop with short wires. The laboratory power supply is set to 13 volts. The activation solenoids have a resistance of 7ohm/piece. On activation the autosteer coils will remain energized for only about a minute until the BTS442e2 gets hot, the voltage on the coils drops and the coils releases. Is this too much load on the mosfet and should a relay be used here? My understanding is no. I tried changing the already bts442e2 to another one and had no effect. With one coil only connected temperatures remain reasonable. Bts442e2 is equipped with heatsink.

The BTS442 is not good enough for large current, it’s only good to drive a relay

I looked at the datasheet for BTS442E2 and the maximum on resistance should be 18mOhm (15mOhm typical). If we calculate power loss from that it’s ~4A * 18mOhm = 0,072V voltage drop over the switch and that gives 0,072V * ~4A = 0,29W. According to the datasheet The thermal resistance from case to ambient air is 75 degrees celcius/watt and from chip to case 0,75. That would be 0,29W * 75,75C/W = 22C. So if the ambient temperature is 25C the chip should get around 47C and that’s without a heatsink. I’m not saying it didn’t get hot, I’m just saying it seems strange to me.
I have a switch ic with 60mOhm on my board for that same pair of valves, that should be almost 1W and I have an SMD component with a small copper plane for cooling and I didn’t notice that it would get hot just a little warm.

Could it be something else that’s wrong? Like if its turning on and off rapidly all the time, swiching losses are a lot higher than when it is fully turned on.

I’m going to test mine tomorrow again to make sure it doesn’t get too warm.

Many of my installations run on Kaupoi Bts boards without a heatsink with these two valves and never had a problem. I just connected one disc to check if Bts heats up, when I touch it with my finger it is a bit warmer but I wouldn’t say hot.

Coils are hot too. Is 7 ohm resistace normal? I test tomorrow with battery as powersupply (without lab power) in case it’s causing something that you can’t see with multimeter. I cant figure out anything else because there is no much in pcb before bts, which is already changed.

I power it from a small 12v battery. The coils get quite hot, but that’s normal. Perhaps the power supply is the problem, I recently had a similar problem with my automatic bandsaw. I built a new Mega 2560 control for it, the 230V coils caused problems with interference, so I replaced it with a 24V powered from a 230/24 power supply, the coils started smoking after a few minutes. Replacing the power supply solved the problem.

Tested with 12V battery. Same result, bts get very hot and cut off. Measured also voltages at BTS pin 2 and pin 3 +vbb. They are ok. Maybe next test just plain bts without pcb. 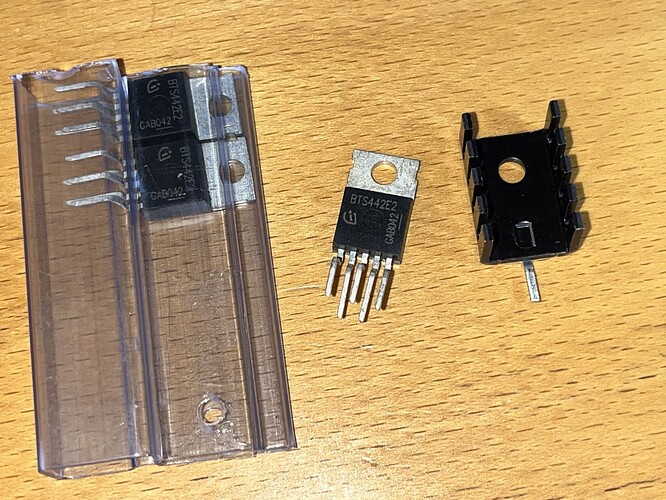 Is the BST back gnd or 12v? Is the head sink the problem? Making a short?

Bts frame/tab is connected to +Vbb pin3. Heatsink leg on pcb is not connected anywhere. I tried to remove heatsink anyway but but nevertheless the BTS is warming up too much. 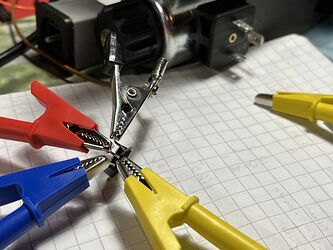 After this test I took plain BTS without any pcb connected output to coils, 12v battery to vbb and 5V source to input pin. Same behaviour this way too. Then replaced coils with working light to see if there is something with coils. Still the same result.

Now I Think there must be something wrong with those particular BTS mosfets.

Where did you buy these Bts442? Maybe should try same source if could find working pieces.

Thing is with the BTS442E2 they dont manufacture them anymore. Anything you buy of them is either old stock or copies. Maybe you happend to get a bad batch of copies. I looked a little bit at mouser and at Infineon if I could find a replacement with the same pin mapping but no. It seems that the ones in to-220 package is rare. 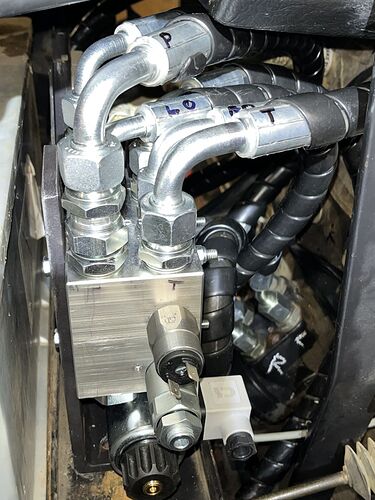 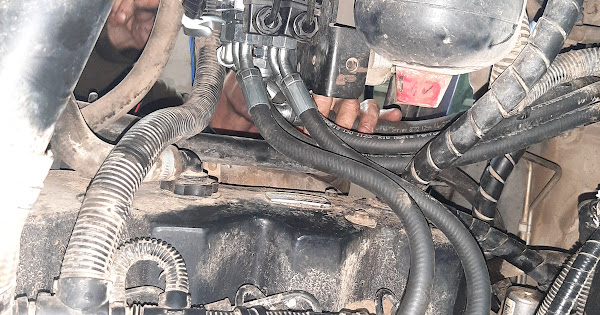 Today I also helped to install in NH T7

Is there a schematic how to install electrics to new all in one PCB? With deutcsh connector.