Has anyone explored using something other than GPS to guide autosteer with AOG? I’m thinking of cameras, sensors, feelers, etc that sense the location of the crop rows. In my case, I am wondering about using a camera to follow strip till. The strips may not match the AB line exactly and I want to plant crops directly on top of them. Would it be possible to make input from a camera mimic an IMU and use the roll compensation functionality of AOG to adjust the GPS antenna location based on the camera’s input?

I like the idea .
Few months ago , I haved played avec une camera intelligente (OpenMV) , based on stm32.
In examples sketchs , there’s one to detect line or create a line with an alignmen of object .
I think it could be done pretty much easy with a thing like this .But I don t have the skill to do by myself .

Makes sense but what would be the role of AgOpenGPS there? I thought the camera system would take the AOG task, the Arduino part might be reusable?

I wasn’t very clear with my original post, but I wasn’t talking about removing GPS entirely. Rather, have a solution that shifts the GPS location around as needed - that’s why I brought up using the roll compensation functionality. I think a better solution would be to actually shift the AB line according to the input of this other camera/sensor, so if you temporarily lost guidance input from it (driving through a grass waterway, for example) you would be back to following an AB line with GPS that’s in the right spot for the last known location of the rows. I believe this is how John Deere’s RowSense system works, but I haven’t used it myself to know for sure.

Even if the GPS signal was totally removed from the tractor steering system, there are lots of benefits that AOG would provide - user interface, steering tuning, offsets, mapping, etc.

Even if the GPS signal was totally removed from the tractor steering system, there are lots of benefits that AOG would provide - user interface, steering tuning, offsets, mapping, etc.

How would it map without GPS?

The easiest way to do this would be to use a second nano connected in parallel to the cytron that would take over camera control.
AG could then work by mapping.

basic idea to debate
possible to put the antenna in sliding support right to left ±50 mm.
camera/arduino make modification of the antenna position during working task and Aopengps keep the guidance task fo all time

GPS removed from the tractor steering system, the part of AOG that steers the tractor, in contrast with keeping it involved as secondary guidance for steering as described in the preceding paragraph. Not removing GPS from AOG as a whole.

I like this idea, could even give it more like ±250 mm. It would probably be the easiest way to test alternate guidance sensors in the short term.

Full disclosure, I am still working to get the normal AOG + PCB v2 autosteer set up in my tractor, so it will be a while before I can build or test anything.

Antenna would not pysically need to move, just tell AOG that it did. A little coding math on the offset and AOG would still map it in the correct new location and drive to that location. I think???

old text but this idea i really like, to adjust the line with cameras

I see this is an older topic but looking for a similar set up. Mine would prefer feelers on row crop equipment for task like side dressing, spraying, cultivating and ultimately combining. The idea is simple enough but I know nothing about coding. It could be included in AOG @BrianTee_Admin as a setting to pull reference values from, so one could simply turn it on or off for there desired task.

Maybe one way to do this is to make the feelers act as keyboard shortcut or even as joystick. Then open AOG in Sim and let shortcuts steer the tractor.
One of the threads mentioning shortcuts :
Customizable keyboard shortcut.
EDIT:
Correct as potatofarmer says in next post, but to follow any row (planted with a drawn machine without gps on it) would also be nice:
Another way to do this with feelers (or camera) is to open normal AOG and use “Drive” if there were shortcuts for R and L there.
And If you still have the gps on the tractor you can “paint” the worked area correctly.

Would it not be easier just to put a second GPS on the implement to ensure it is in the right spot? If you are willing to have 250mm of error, RTK already is 7mm and does not drift year to year.

Problem is we don’t run rtk and if it is custom work nobody else is running rtk either especially in my area of the US. No free networks no stations and BIG money. Heck these guys are barely using row markers. And at that, the end row gaps range between 6 inches apart to 45 inches for a 30 inch row space. Yeah stupid numbers but what I have to deal with. I know there is a company that kind of does it already. They intercept the gps signal, add there feeler guage reference number and they send the correction to the monitor for steering.

Headsight offers high accuracy row-crop autosteer control systems for corn harvesting. They use mechanical sensing wands to feel the stalks and integrate with an existing steering devices to guide the combine down the row. Headsight row guidance...

I obviously could fix the rtk issue on my own stuff but that is a fraction of what we do. We custom apply urea over top corn for guys with a self propelled so row guidance would make our work look even better. Especially with there really bad rows to follow.

This seems like it would be relatively simple, if aog had an option to take input from GPS or feelers. Remember the hydraulic slide hitch that basically took angle of the feeler sensor and moved the slide hitch left or right of center accordingly ? Like someone mentioned earlier, just use that input with the drive feature in aog. I think just convert the feeler sensor to counts per degree and run it through a Kalman filter, then to drive.

Here is another system and how they integrate it. 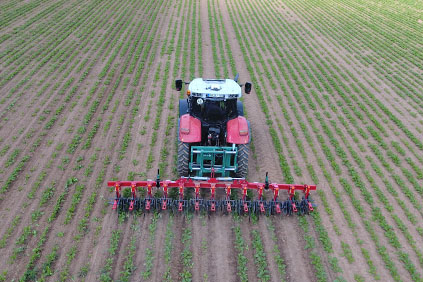 Should be fairly simple to auto nudge the ABline over as needed to compensate for the corrections from the sensor.

I’d assume that a reading of 0 to 256 would come in in byte form. 128 would be center. Anything other than that would nudge the abline over. Filtered of course.

I like this idea. We’d like to use it for row crop harvest instead of having to nudge on screen. A keyboard shortcut could work too but I think a PGN would be more reliable then spamming a “keyboard button”, especially when you minimize AoG.