I wondered if anyone has already made some sort of plow steering. By that I mean an automatic width adjustment to easily plow fields with a wedge. Seems interesting, but I have no idea how to get started. Maybe someone already has some ideas?

I have built a system on a Raspberry Pi. I can set it to make “fixed” straight AB-lines starting from one straight edge of a field or I can make it adjust the plough width continuously to manage a field with one headland longer (wider) than the other (hope you understand what I mean). Still both edges straight. Obviously limited to some 5 to 10 percent difference by the plough adjustment range (and quality of ploughing).

I run it on a Fendt with its internal VarioGuide RTK receiver. Feed the tractor position to my Raspberry and the Raspberry adjusts the plough width when needed. I have a transistor switch in parallel with the external switch on the mudguard, this switch can be programmed to drive the hydraulic valve controlling the plough width.

Unfortunately my programming skills are non existent and I have not implemented any complex contour mode operation, like start or finish at a curved field edge, either with fixed plough width or preferably adapt towards (from) straight lines.

I have not considered any “antenna on the plough” approach. Don’t think the improved accuracy pays off.

Previously I used to plough with the tractor autosteer. Gives quite pretty straight lines but is quite a pain to adjust properly if the soil type changes a lot. The tractor needs some room in the furrow to steer left and right. Much more comfortable to let the tractor drive freely in the furrow.

You can make the A-B line from the side of the field where the last furrow is to be, and even by looking at the screen manually, you can adjust the plow during plowing to finish well. The only problem is that the plow is rotated with each turn and changes the displacement of the hitch again and again …

Well, you can adjust the plough manually but why do we have AOG when the tractor can be steered manually?

Also I’m not aware of any commercial screen that can handle wedge shaped AB-lines, straight lines that are almost parallel but not exactly, a bit more apart from each other at the other headland if you see what I mean.

By the way, commercial plough control systems like the one from Kverneland can do part of this but the unlock for fixed parallel lines is already ten time more expensive than my Raspberry with a bit of additional electronics.

Our old Autofarm 5001 has a guidance mode where you set two AB lines (two sides) then select what tool width you want and it will create whatever wedge shape and overlap as needed.

Interesting, I also record A and B points from two sides of the field to calculate AB-lines in-between. Did it also have plough control?

Never seen these for real but e.g. Topcon used to have a product for plough width control but it too only did fixed width AB-lines (quite often good enough). 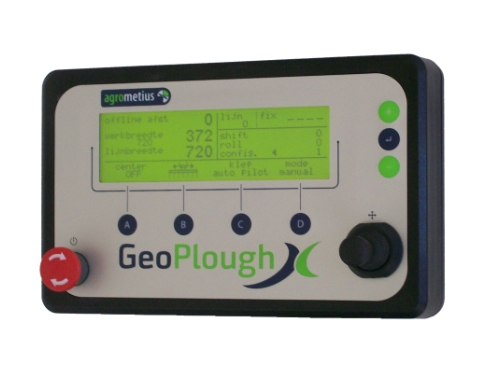 Unfortunately would need the wife or the son for translation. The Vantage web site had a description but quite vague. Nothing mentioned about anything else than straight AB-lines.

I understand that commercial systems can start from a contour line and steer the plough to reach a straight line. Quite useful in some case but the next year one would prefer to do it backwards, to finish the field to the contour edge in a controlled way.

this is a fun project, very interested in it.

A commercial product from the netherlands:
Vario Plough Control
Dont know if that helps but that system can do contour, not just straight AB-line

Interesting, not sure if I’ve seen this product previously or then they have added the more complex modes since my visit.

For me Isobus and a virtual terminal would be fine, I just wonder how much the product costs with an Isobus implement box plus the additional HW. Also no description about the option to use tractor’s electric hydraulic valves. Control via CAN would be nice and clean but I assume they steal the spool drive. Hydraulic flow settings from the tractor screen lost?

I don’t understand why FAN mode is restricted to Trimble screens?

The manual does not explain ploughing from/to contour edges of a field. I get an impression that they only handle a start from a contour edge and then move towards straight furrows as soon as possible. It should work the opposite direction too. Shouldn’t be difficult for anyone that can handle programming a bit better than myself. Perhaps it is just an outdated or incomplete manual.

By the way, I don’t see this really an AOG topic (future feature), wonder if anyone else does? Perhaps an independent app like grade control? Very useful information shared so far anyway and I would definitely like to see more.

Well, we have but the soil and climate is so different in different places. We don’t plough more than some 20% of our fields.

Those who follow organic farming plough most of their fields. There are so many differences, difficult to expect the same being the best for everyone.

In the meantime I have called the people from Vario Plough Control from Netherlands. They also don’t use gps-receiver on the plough, but they do put a roll sensor on it. I was thinking to make the working width wider and make it overlap so the AB-line is at the correct position. The big problem i believe is not to jump from one AB-line to another. I mean that when you start at one end with AB-line 3 for example Agopengps doesn’t jump to line 4 or 2 so it can create a straight line as soon as possible. (if you know what i mean.)

Roll sensor gave an idea. Not for roll but a WAS sensor set at zero When plough is in “normal” width.

Using UDP and an extra PCB with an ino that only listens to AOG program.
Tractor is in furrow but a little of line (15 cm) angle of wheels on tractor is only a little against edge of furrow but never can get there, but second PCB tell plough to move until it reaches same "angle on its WAS.

Or just make an ino that reads tractors WAS angle and plow WAS angle, and then the Nano (via 2 relays) tell the plow width hydraulics to change left or right until Tractor WAS plus Plough WAS calculation is Zero again. Maybe a roll sensor (or a switch) could be needed to invert direction when turned around.

I agree this might only work for minor differences in distance from AB line, as tractor could drive out of furrow.
And new integral should probably be set low.

In plowing,
If the corrections are made at the start of the field, the furrow remains straight and the corrections to be made minimal. The big deviations come when you watch a movie and let the tractor and the plow follow the furrow.

Correct but I feel ploughing fixed AB-lines only too small an advantage over just ploughing with auto-steer. That is don’t let the tractor drive freely on the furrow but use auto-steer normally. If you put the plough width a bit higher than the AB-line distance, the tractor has sufficient room to steer also “off the furrow”.

The real advantage from plough control comes when doing wedge shaped fields (AB-lines not parallel but fan shaped. Another one is when adapting from a contour line gradually towards straight AB-lines (or vice versa).

@Nukkes, is the roll sensor only to detect the direction of a reversible plough? The tractor GNSS system usually already compensates for roll. Myself I use a simple reed relay sensor to figure out if the plough is working towards left or right (and an angle sensor measuring the plough width).

Yes, roll sensor is only used to detect direction of the plough. I think relay sensor should work also, but i don’t know how AOG can read it and adapt offset.

Vantage Agrometius uses a trimble angle sensor same as Trimble use for there autopilot system.

Can you share the code for the Raspberry with me? Most of our fields are almost rectangular, so i like to try the rpi setup.