A huge thanks to everyone’s posts and software that they have shared.

using a ntrip app on my samsung phone

port c was set to rtcm in 8n1 nema out

yup any bluetooth to RS232 adapter will do the job, provided the RS232 is set to the speed expected and set on Port C on the 372. I use a sparkfun bluetooth module connected to a TTY to RS232 adapter, and then I just made up a cable with the Deutsch plug on the end of it. This season I plan to set it up so I can switch a toggle switch to go between radio modem (a Digi 9Xtend SX) and the bluetooth module.

I put everything in the cab and run the RS232 cable up to the roof. That way I don’t need a fancy weather-proof module like back 40 makes.

The DigiFarm Beacon and the RTKConnect are really just $500 because, well farming. Nothing special about them, other than they are rugged and weather proof.

probaly would have went the same way as you now after all the stuff i have learnt over the last week, a lot of your post that i have read really helped out and made a big difference into getting it to work. started out by getting the back 40 module to see if i could save on the annual rtx subcription code

Here is a photo of a module that I like to use. I take them of the plastic din rail mount and put them inside a project box. I don’t use them outside the cab through. I like the module because you can power it directly from 12 volts and the screw terminals make it easy to change plugs. Typically they are sold as DIN Rail Mount Serial RS232 adapters.

What does this module do? Do you have a part number?

Glad you got your 372 to work. We have used the rtkonnect last couple years. They work well, have had a few issues with iphones and them. If you use the rtkonnect you shouldn’t need lefebure, hotspot your rtkonnect to your phone and it will do the rest. You probably already doing this. We have switched to using Ardusimple xbee wifi masters, also looking at just using a esp and rs232 to ttl adapter. Ardusimple costs about $170, plugs into usb, simple

. I set up a base with f9p and esprtk to feed corrections to 372, antenna name and rtcm 1008 were keys for us as well

Also on your 372 do you have port b set to input on C or output on C? I can’t remember the option off top of my head, we just had trouble with one setting that would change back to preset values on every restart. Port C is the key, we don’t send any data positions back to base from 372 but could, you shouldn’t need to with your own base setup

I’m pretty sure you set Port C set to input RTCM. The other ports will reset on power restart. Port A is TSIP by default. I can’t remember what Port B is. But I might have it all wrong.

Yes, that’s right. It’s port C in. Port A definitely resets on startup, we had tried on port b a few times but that didn’t work for some reason. I thought we maybe had to change a pin on the rtkonnect to make sure we sent the data into port c but that’s a long time ago

and memory not so great

used port c and have ver 8.3 in the 372, set rtcm in and nema out at 115k using lefeburne app on my Samsung phone to Bluetooth the ntrip. with having the nema out it will display the correction level and speed on the app on my cell phone. for the nema setting in the 372 only GGA was in capitals all the rest in nema 1 2 and 3 were lower case. found a pdf on the setup of a 372 for raven sling shot that gave all the setting for rtk in the 372 i used for the rest of the setup and that made the receiver go from using 6-7 sats to 14-17. guessing that set the receiver up to use the glonass sats

should be the link to the slingshot settings

After starting the Tractor i get RTK Fix in a minute or two. It really works well. On an open field I have 12 Sats. I am based in Europe.

Jos from Back 40 Precision figures that the 372 should definitely be able to use Glonass in the RTK fix, even though the 1230 message from the ZED-F9P has bias values of zero. He told me most modern commercial receivers report a bias of zero these days and don’t need to even see the 1230 message at all. I know that ZED-F9P rovers don’t need it. Eventually I may try turning it off and see if Trimble can still get a fix. Although I’m not really certain how to tell if Glonass satellites are being used by the 372. Does anyone know how to tell, other than satellite numbers?

No part number for that module that I know of. It is a Bluetooth to rs232 serial adapter and runs on a wide range of voltages. They seem to be getting harder to find. Here is an ebay link to some. You could probably search for din mount Bluetooth adapter on aliexpress and similar China sales sites and find the same or similar module. 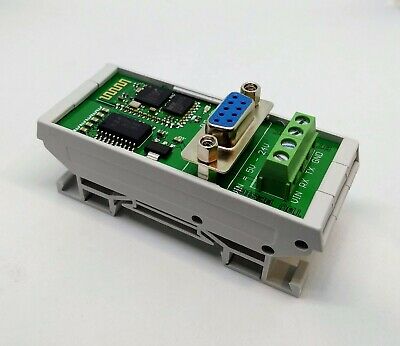 Up for sale is an industrial DIN rail mount RS232 to Bluetooth bridge. Use this module to wirelessly transmit data between machines or sensors and a PC, smartphone, or data collector. Easy to use Bluetooth module transmits input RS232 data wirelessly...

Does anyone know, if the ag382 can get a fix with the stream from the f9p? What about others? Novatel, topcon?

I believe so. Any fairly modern receiver capable of using RTCM should be able to work with the F9P as a base, provided you add that ADVNULLANTENNA message (1007 or 1008).

Easiest way is probably just by number of sats. If you have more than 8-10 you are most likely on Glonass. We found without Glonass we were down to 4 or 5 at certain times of the day, with Glonass a low number is 9 or so, usually 12 or so

I know the esprtk guys were working on adding streams so that a F9P could be a base for a Topcon, not sure what that all entailed but they did mention it to me a few times. Email them they are great at responding

I seem to be around 12 sats most of the time, so probably using Glonass. And thanks to you for reminding me about xFill. I had assumed it just didn’t work without a subscription before so I never seriously tried it. I manually set the frequency and now it works great. Seems like I have one field where I have issues along one edge, which is odd because I am using NTRIP most of the time so signal is not an issue. xFill should help here. Many thanks.