If you don’t use the MMA, then you shouldn’t need the Bno08x either.

He is using the 055 for heading so could well miss IMU heading if he doesn’t have any BNO.

I can’t really see any reason the BNO055 code from say 4.3.10 couldn’t be added to the arduino code, for heading. Bit of coding required obviously but would work temporarily, given the shortage.

In fact, the bno055 is used for both heading and inclination but with version 4.3 so exactly like the bno080

It was found woefully inadequate for roll but heading was good most of the time. Until it auto re calibrated.

For me it is stable and corrects the slope well, I calibrated it at the start. i don’t know anything about arduino code, i wonder how could i put the ino bno055 instead of the bno080 in the ino v5.

I can’t really see any reason the BNO055 code from say 4.3.10 couldn’t be added to the arduino code, for heading. Bit of coding required obviously but would work temporarily, given the shortage.

Not only a reply to Alan, but also a message for @fredolatuile :

Well somebody is about to find out, because thanks to @Vili asking it. I added the code from 4.3.10 back.

It should Autodetect the BNO on adresses 0x28 and 0x29.
I am not sure if roll is wanted, or needed. Or even correct. But if it is not, just comment that out. And send 8888 like in the else statement below 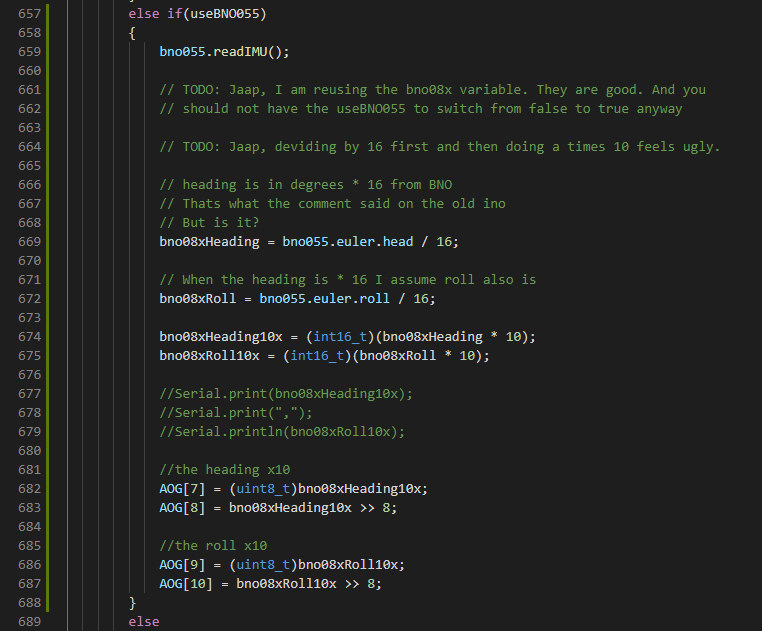 I haven’t tested it. Will try to lookup my BNO055 if I ever had one.
I would say check it out. And report back.

Update: Forgot to set the useBNO055 to true when one is found. Uploaded a new zip

Roll from the 055 wasn’t used in previous versions of AOG because Brian found it poor, that is why he used the MMA too. The 085 is hugely better so in current versions it is used.

Would be interesting to try though, just to see. I found the 055 ok most of the time for heading then for no reason it would decide to re calibrate and creep either up or down on the heading. This causes heading issues akin to a badly set up WAS. ie, running consistently off line.

Is it better than no IMU?

Long ish fix to fix with PP and a decent lookahead it probably better, apart from in initial line acquisition.

Once the 055 starts creeping it makes a right mess of accurate drilling. Especially in the likes of maize.

Is it better than no IMU?

Has anyone ever tested this?

My little AV might be the ideal test platform for such queries if I can find the time to get it out. Will see what I can do, but just wondering if anyone else runs their autosteer system without an IMU?

I Ve got one tractor with no IMU 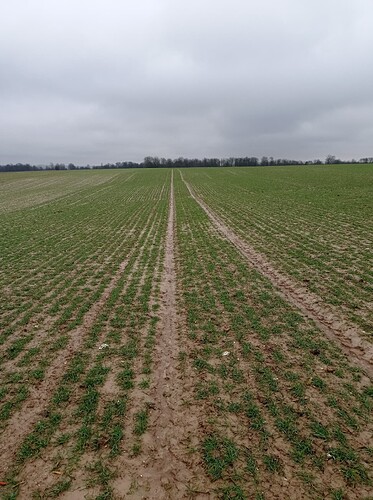 I’ve done it plenty of times, as have numerous others I would guess. In smooth level situations the benefit is very marginal.

For a start, your little vehicle will be affected less by roll as the antenna will no doubt be pretty close to the ground. This will in turn mean your fix to fix will be more accurate, so heading derived from this will be more stable. Both reducing the need for an IMU. All relative I know but the accuracy of RTK is constant so your significantly smaller vehicle will be running much closer to the limits of the base technology to start with.

Indeed, you could design your vehicle specifically to allow a low un shaded antenna mounting.

Anybody tested this already? See the update above.

Thanks for updating the version with bno 055! You are awesome !!! I will try this. Thanks again.

If your ground isn’t too rough/hilly, you can definitely use AOG without an imu. Roll corrects for sideslope correcting the antenna position, and the heading makes the gps heading smoother. The steering wheel will turn a bit faster back and forth.

Setting the fix to fix distance longer to like 2, and it steers pretty darn good actually

After testing, it works very well, it requires very precise adjustments, the heading is really precise. I put the gps level very low and bno 055 imu high. It’s a pleasure! What beautiful modifications. I haven’t found any bugs yet. Congratulations to you!

After reading most of these posts, I’m curious, because it seems like most Aog users run some kind of Imu with one antenna, does it improve performance or stability over a Dual Antenna System?

In terms of smoothness and performance, the GPS on its own uses only the wiggly fixes to calculate heading.

GPS + IMU helps smooth the heading value and also corrects the GPS position when going on sidehills. The IMU drifts from what it thinks it should be so the GPS keeps telling it which way the correct way you are actually heading.

Dual GPS - always has a true heading and roll from 2 antenna.

Thanks for the update!

In the machine-usb-code for nano from Mathias is simple rate control included.
Is there any chance it can or will be integrated in the new program, or do you have to use the seperate rate control-app. (Which is to complex for my simple needs.)