I’m not faminliar with the Deere units. The antenna module is just an ardusimple board, IMU and ESP32. Just relays info from RTK2B and IMU wirelessly to the cab. The valves and PID are controlled by the GradeControl Module Which acts just like the DAC8000 unit and just sources power from your scraper plug on tractor

I just meant that gnss antenna, reciever, and radio are all in one module. Like the green and yellow ones on front of deere tractors.

Couple more screen shots of the Auto Shore feature. Just select a Shore min slope and it will shore your ditch to that Value. The green line is where the shore would roughly come to based on the surveyed elevation. Be cool to get this all tested in real world applications. 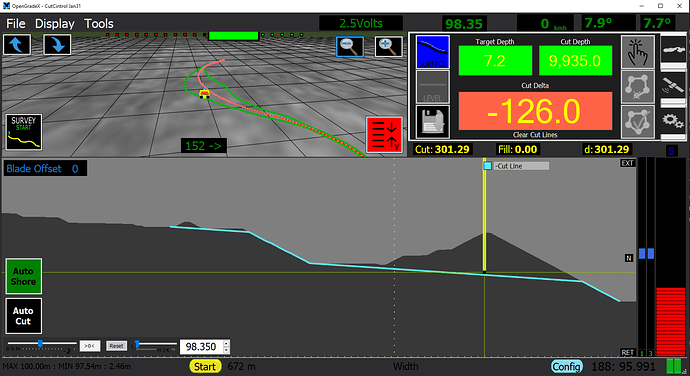 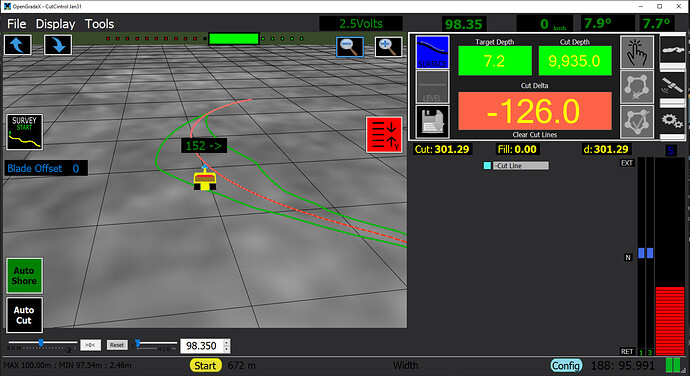 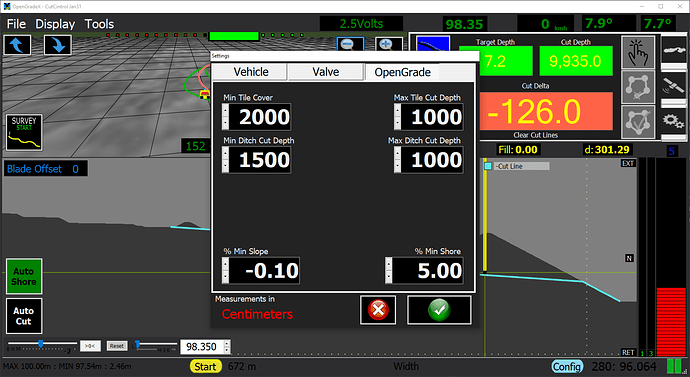 this looks great, i would be interested in trying Open grade X on a pulled scraper. i’ve tried out the sim and was trying to get my head around what would be needed but i’m still a little lost.
which pcb should/could i use, got a little confused while reading the thread. if the pcb you dessigned would be something we could purchase i know i would like to buy one and support you.
second thing is the imu listed is the bno 055 but i have a bno 085 since the 055 isn’t used in aog anymore, soo can i use a 085 or does it have to be a 055

everyone on this thread has done such a good job and felt like i need to congratulate all on the progress that has been made. good job
-Bjarke

I will be realeasing OGX. V1.2.1 soon. I will lstart a whole new thread for it to avoid confusion between the different projects. V1.2.1 is fully wireless and I have two board designed for it.

When I release all parts and everything will be found in the file similarly to what has been done with AOG. Once boards have been tested I will release those as well

For those who care not to mess with the confusers and soldering, but would still like to use the system I may offer ready built kits that would be plug and play.

As for the BNO85 it may need to add a different library to work with that chip instead of 055.

Have started the new thread and released the Code Base for OpenGradeX.
Enjoy.

I am starting this thread for the OpenGradeX Wireless RTK Drainage system I have adapted to Brian’s original OpenGrade, with help from others in the Grade Control thread of this forum. Here are some screenshots, along with the link to my Git-hub. PCB boards are designed and Gerber files will be release upon testing of the boards. [OpenGradeX] [OGX1] [OGX2.PNG] [OGX3] [OGX4] [OGX5] [OGX6]

Yeah that would be another option for it as well.

Has anyone had success using the ntrip client setup in either OpenGrade3D or version 4 of AgOpenGPS?

I think I successfully used NTRIP with AoG v4. I expect many people did/do.

Would you be able to point me in the direction the of the INO you used for it. Looking to add it to OGX but running into issues.

I used it in AgIO which sent the RTCM to the F9P via USB so no INO/Arduino involved.

Okay I had saw a UDP port option in the NTRIP Client section, I thought that there must have been an INO involved then, that relayed that information to the F9P. I am attempting to use UDP to transfer the RTCM data wirelessly to the Antenna Module. I am able to get all the byte information to the antenna unit, but when attempt to send it over serial to the F9P on board it doesn’t respond. I’m thinking it may be an encoding problem. I’m sure all the info I need is in the following book but, I would much rather not spend $450 to find out, and hoping someone has implemented RTCM over UDP already. 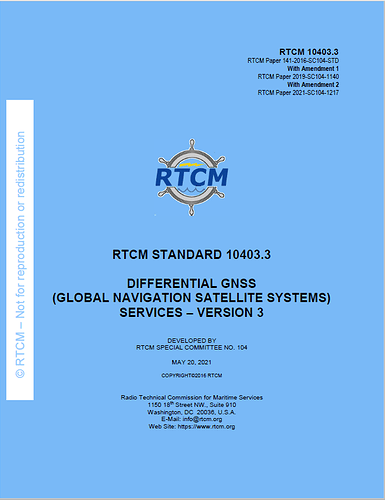 RTCM 10403.3 defines messages that are used improve the accuracy of location provided by Global Navigation Satellite Systems (GNSS) such as GPS, GLONASS, Galileo, QZSS, and BeiDou (BDS). The method used is differential correction which involves the...

You should check at the dual gps inos. They use ESP32 and they can use the built in NTRIP. I cant help more, I never used dual or an ESP32!

Maybe this code will give you some hints.

Found this on the dark web. It is one edit earlier. If you understand all that, I’d be interested. My local Ntrip gives 1004, 1006, and 1009 messages. Decoding them is a challenge that I’ve not been able to solve.

@KentStuff Took a look through those documents and my brain started to turn to mush. I don’t think I will look to decode it at all. More so just looking to force feed it into the F9P and leave a lot smarter people than me to parce through it. Thanks @Pat for the pointer to that INO. Unfortunately I had pretty well the identical code it employed so I’ll have to keep looking to find my error.

Just to be sure, is your F9P configured to receive correction over uart1? since radio is typically over uart2.

@Pat I have It to receive on UART 1 Protocol in → RTCM3 (as I know that works through U-center NTRIP client connected via USB for testing). There is definitely some communication happening as all the value OGX react once it connect to NTRIP Caster after startup. Unfortunately not the right communication though. Not sure what I am missing as everything seams to be there just doesn’t work, may need to be encoded to UTF-8 or some other encoding protocol before it is transmitted to the F9P

Can you snif your UDP data and compare to the serial output to see if the characters are passing through transparently?