Little bit late I know as we already have one on here, but had already filmed it by then so thought id upload as well incase its of any use to anyone.

By no means a soldering expert!! Nice video! I’m designing v3, any tips to make it easier to assemble after having gone thru it?

Would be nice to have some holes for standoff’s for the MMA? I think as can be quite loose in the socket…Can anyone confirm if it’s safe to drill the V2 board in that location?
Also some polarity symbols for the LED? and maybe a slightly more clear symbol for the voltage regs…

Other than that its pretty bombproof / ideal… Any planned additions / improvements to the V3 board?

Another question (may have been asked before), is there any reason to not house the two ardusimple boards in the same box as the autosteer board? Would make my install super tidy if i could, but not sure if potential noise / interference could be a problem?

I have some questions about the PCB and parts. I ordered a PCB using the Gerber files yesterday from the files that were dates Jun 20/19. Now I am wondering if that is the current board that I should have ordered? Also I created an account at digikey and uploaded the parts list, but I am confused because there is a parts list and a component list. Which do I use? Also it comes up on digikey that some parts are unavailable so that adds some confusion because the parts list I look at versus the one I uploaded to Digikey are hard to compare. Just some thoughts from a rookie trying to build this. Is there another PCB board design coming?

PS. If any wants a board or 2 in Alberta I have 5 coming probably won’t need all 5

It’s the PartsList.xlsx that you need on DigiKey.

I also found several parts were out of stock, but there all fairly easy to find elsewhere, best thing is to open it up on digi key, scroll down through, any items that are out of stock, just copy the part number of the part (not the digikey number) and google it / ebay it…I had to get the voltage regs, the cytron and the opto Isolator sockets elsewere, all from ebay for virtually the same prices…

Also on the list, it includes a box etc, which you may / may not want to use, so just remove what you don’t want, you also don’t need all the relays, i just had the relay socket, and used a normal automotive relay I had already. but if you enclosure isnt that tall, you may want to remove the socket, and just order a single relay to solder in (2 are in the list)

They are not as quick with shipping but it’s not spring yet neither.

Maybe putting the Cytron (sp?) on stand-off’s so those not using it or remotely mounting don’t have wasted space? Or maybe just a second set of gerber files with that area omitted?

Would be neater than my hacksaw!

I found the parts lists slightly confusing. Maybe a list comprising of just quantities and standard component descriptions rather than distributors part numbers.

I ordered all my parts from ebay and saved a considerable amount, most on postage.

Do you think having the terminal blocks is better or worse then connectors where you need to add pins to to make your interconnects? I do like the ability to easily connect/disconnect and change with screw terminals.

Is there a particular connector style you think would be best?

Not sure about the best, but this XH-series is what I like to use. 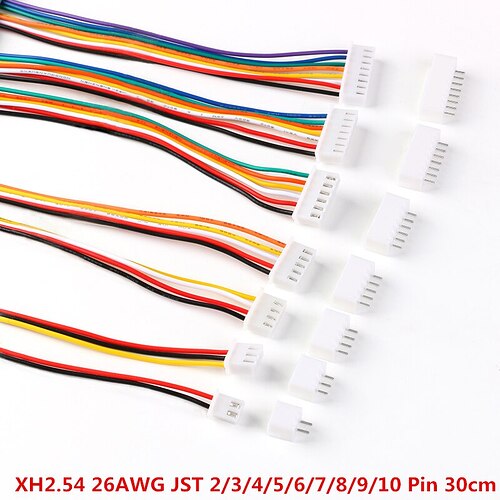 Question about the PCB board. What are the tiny holes in the board used for? I have some circled in the picture.

That holes are for connection top and bottom layer.

I just found out there are multiple versions of the partslist.xlsx. The one that comes to your desktop with an Aog install is OK. The component and partslist files on github are not usable for a BOM. (numbers are not recognized by Digikey)

Something that would help me, that I have not seen on any documentation is what through hole connectors to use for the different connection outside of box ie steer motor wires, battery, wheel angle sensor and 12v to 24v converter. I know everyone has their preference but would like to get some idea as to what to use as there are too many options to look at when looking them up. Have seen some pictures and videos with them in use but I am not sure what to filter on when looking up in digikey. Thanks in advance for your help.

As an odd aside, i’m shocked by the excellent quality of the boards made by these chinese companies for literally pennies. A board like that made in Canada would be 300$ easy - and you would get 1 - in 3 months.

My JLC PCB ones are absolutely first class and from ordering 5 pcb’s to receiving them was a staggering 3½ days. £16 delivered.

If using 12v to 24v converter, I’ve just drilled 12mm hole to the box, and pulled wires through that. Some shrinking tube for sealant.