i post a trouble, i can say an small tools trouble
(version 5.1.5 or lower)

the solution is to increase the speed of steering but it is not recommanded
( i dont feel this in 4.3.10 )

Can we try to have some auto locking line after engaged the steering to give the the software more concentrated to the line target ?
Or a missing parameter need to be add in Pure poursuit / Stanley configuration 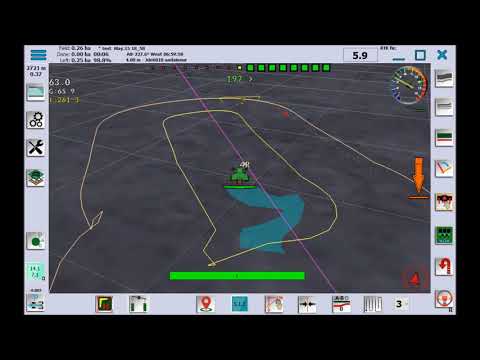 Others post it doesn’t pick lines fast enough. I’m not sure what to do…

Thing is, you should be able to drive along the headland and 90 to the work…and once it “flips” the the line you want, should be able to hit the button and leave it to it… Angle sholdnt matter… Worked great on 4.3 that way and on greenstar etc…

Small tool is difficult to stick an abline. It takes very little overshot for AOG to think you are on a different line. Then by the time it is corrected you are bouncing from line to line. I built a sticky line that only advanced when you asked it to. It had its own problems. I personally would like to see the ABLine shifted to the new location early in the youturn instead of later and locked in that location for a bit.

Thanks Brian, Darren, Kentstuff for your opinion

By logic when you engaged the steering by the switch, the driver already find the line travel that he want. so AOG need to lock the predicted line that it shows and stops to search an other line

Easy to write ( i dont know the software for this)

From the video you can see it is working as intended, picking the line closest to the pivot,

What I found maize drilling a few weeks ago is that unless you are travelling very slowly, with a smaller (3 to 6m) implement the line AOG is actually picking is delayed so you are basically past the line before it even picks it. 2 seconds is a very long time with this size tool.

Pretty much every tool used apart from a sprayer/spreader here in this part of the UK will be of this size. So we are talking about the norm and not especially small.

This wasn’t the case with 4.3. It picked and held a line very well.

Yeah I found this to, I was actually physically having to stop / slow right down on the headland to wait for AOG to flip to the right line or else id be long gone past it, nevermind past where I needed to start steering to get on that line… 24m sprayer no problem…3 meter drill / power harrow…no good!

v4 used to look for a new line every frame, v5 checks every 2 seconds for a new one. Perhaps 2 is too long and should maybe be 1 second or based on tool width?

The version 5.1.6 on the main branch, not the release version, looks for a new line in 1 second instead of 2. Do you want to try it?

If based on tool width is not too difficult I guess that would prevent unnecessary checking with larger tools whilst making it easier to use with smaller kit.

The problem with smaller kit is the tractor turning circle and machine length doesn’t get directly proportionally smaller with tool size so to enable shunt free headland turns you have to make quite a lot of headland passes. This gets proportionally less efficient with reducing tool size as you basically cover this ground twice. Shunting is a lot quicker than going round a field several extra times especially with mounted kit. This is also why U-turn is not always a viable method.

…and also why you inevitably end up hitting AB lines at a fair angle.

i will l downlod it and try today

I try to go more fast and it is better
i try to go slowly and it impossible to catch a line: he switch between two lines

I have this problem when the cmps is on.
But when it is off i have no problem.

I had left off the auto u-turn at the boundary. It should now work.

Now I also wonder if the current ABline can be in front of the tractor. As you are driving at a steep angle to the ABLine, it would get the current abline off of what it could steer to. A look ahead based on tractor turn radius. Picking a point that you have passed or under the back axle seams futile.

Now I also wonder if the current ABline can be in front of the tractor. As you are driving at a steep angle to the ABLine, it would get the current abline off of what it could steer to. A look ahead based on tractor turn radius. Picking a point that you have passed or under the back axle seams futile.

This would be absolutely ideal!

This has a 5 meter look ahead, see how or if it works.

Edit:
Updated below to include curve. As it drives in autosteer, it looks straight ahead for the abline or curve. Currently set for 5 meters. But is is not under the back axle. It steps over the ABLine or Curve before it gets to the end of the You-turn. Again, it will hold the current line until the autosteer button is cycled or the curve or abline button is pressed switching between line or curve. Also, when it comes out of ABDraw it updates. This has also modified the angular velocity formulas to allow for a tighter turn at higher speeds and adds half the track width to the turning radius center line.

@BrianTee_Admin , now that I have it looking ahead for an ABLine, where do I look in the code to see if it is going to turn right or left when it comes up on a line that is 90° or really close. The case in point is a good example. Running a headland and want grab the next ABLine and turn into the field. What I have found is that it typically turns right when 90 degrees.

@KentStuff
i do test this morning in my trial field

I continue this morning with this temporaly version to rake alfafa i dont see trouble and he really works well ( pur poursuit mode ) the steerring is very smooth! even if i have play on steering collon