Section control for the central unit

This board is adding section control functions to the central unit and can be built into the same housing. It should work with both, V2.0 and V3.0 boards.

It’s also possible to split, so that you have toggle switches inside the cabin, which will work in case, AOG is off, and a “power-unit” on the trailer.

Technically, it follows Brian’s (=Nano) and MTZ’s (ESP32) ideas. You have the choice, which µC you would like to use…

Here, a block diagram should appear, but it’s not ready yet…

Status: I ordered the first batch of PCBs. Let’s see…

Top side (unfortunately the toggle switches don’t have a 3D model): 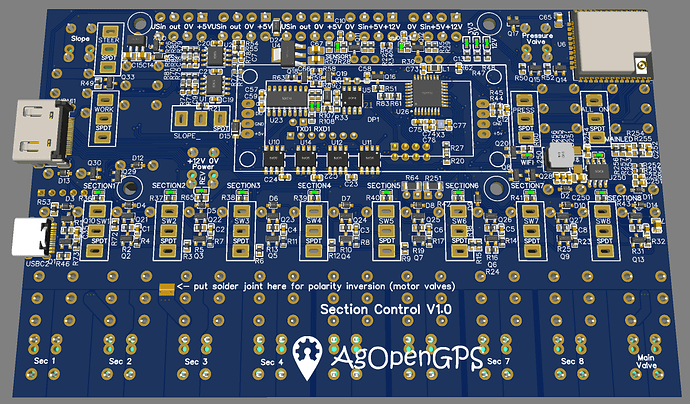 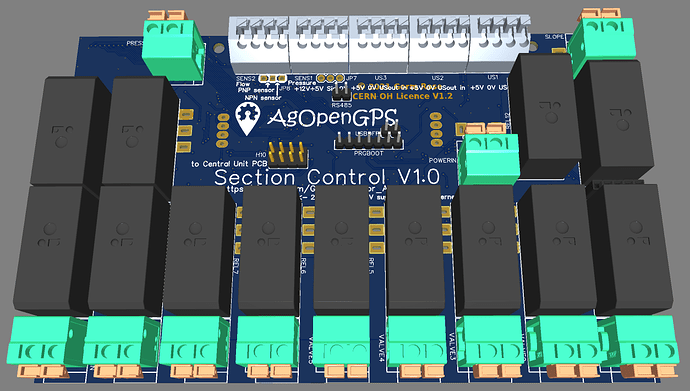 Is it also possible to drive a rate control valve via pwm? I’m thinking about using your board with SK21 Rate Controller

I was thinking about that as well. My idea was to use an LT8500 for that, but right now, I’ve nothing to test with…

In that case, this PCB will be the control unit (w/o relays of course) and there will be another PCB with the PWM driver. But right now, they’re unavailable anyway…

I looked into your schematic Option for 48 PWM-satellite. You would like to swap all switched sections to pwm sections? Normally, all sections or section groups are separated into rate controlled zones. (example left / right), smaller sprayers only one control valve.

Hello Brawler, is this what you’re talking about PWM? This would be the golden version - nozzle wise control on high end sprayers, each nozzle cost a lot of money.

MTZ / Weder code would support up to 2 flow loops, but I think rate control isn’t fully availiable, manually only

that will be the future of course. Anyway most people will still use “old” style sprayers with AOG, I think. But yes, with the PWM/solid state switch version, you can run all sprayers, so definitely time to think about next winter. This time, all relevant full-protected automotive power stages are on allocation. Likely I repeat myself her, but that sucks…

Your actual board, does it support one common ARAG proportional valve (7 sec close time) such as 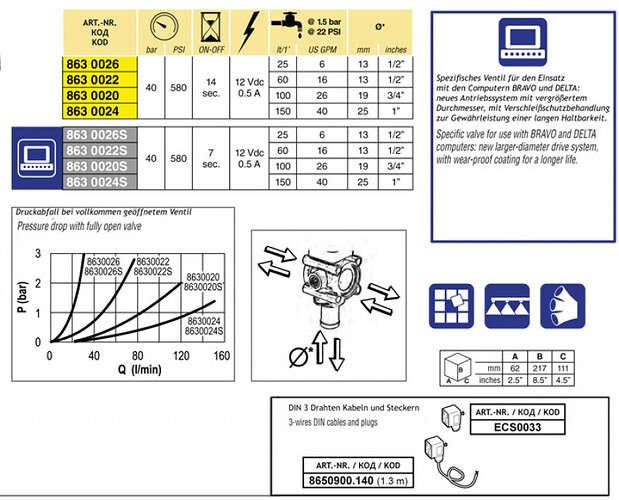 yes, that’s exactly what it’s made for. Plus motor valves (on/off) for each section or just solenoid valve.

Functions like Müller Elektronik Spraydos (quite common in middle Europe)

Just added some description here in English and German. Further languages much appriciated…

This is very good. I’m very excited to get your boards installed.

still waiting for my autosteer boards, but the postman brought the SC unit… 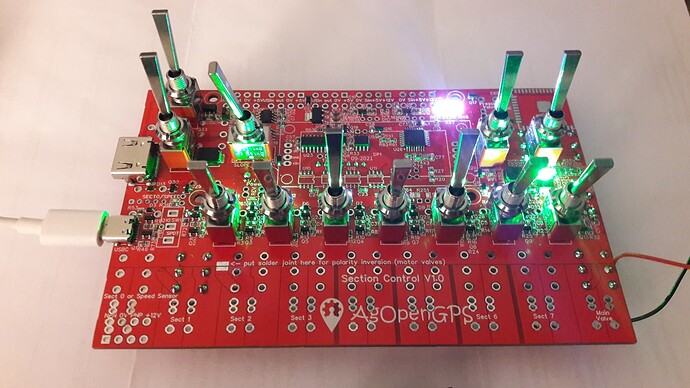 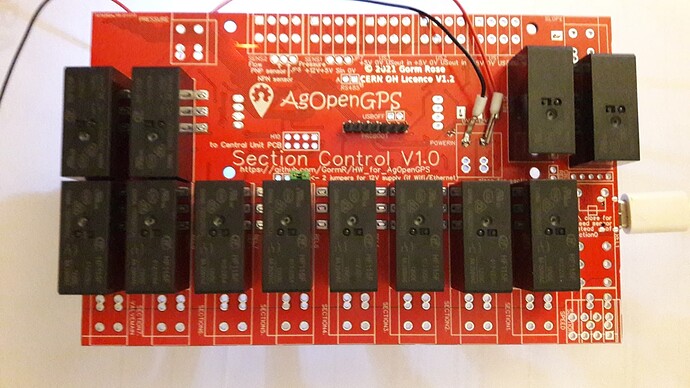 The two pictures show the all-in-one version although the HDMI connectors is mounted for testing. Using one board as control panel and the other one as power stage is possible as well.

For this year, it’s time to say: Happy new year to all of you!

Short video of the test program

The bouncing can be ignored - toggle switches are not soldered. The middle position of that switches is “off” (you need on-off-on switches - the ones in the test are just on-on).

It was a really professional department control. can i use this from usb? I am using v2 card and version 5.2. I don’t fully understand the HDMI connection. Is it combining two different cards? one on the machine and one on the tractor.

yes, you can optionally split: one on machine, one on tractor. Same PCB, but different (reduced) placement for each.
Yes, works with USB as well. Working on the firmware right now…

There are sensors built into the pcb, what can we do? The regulator on my sprayer (sprayer) is manual. Can I make a professional regulator by adding a pressure sensor, flow sensor, solenoid valve and a dc motor for regulator pressure adjustment? such as Arag Bravo. 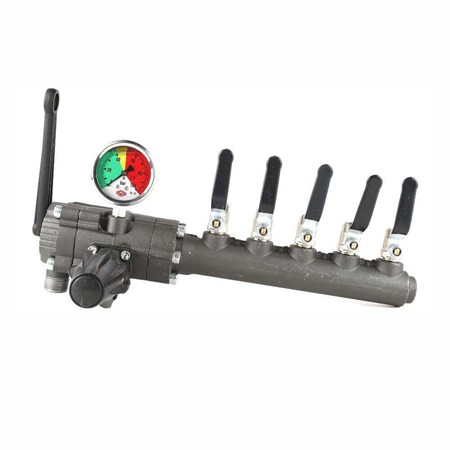 that should be possible, but I’m no expert and can’t tell, what you’ll exactly need. I’m no farmer…

The flow is the important value for farming which depends on pressure and number of open nozzles. When the pressure is constant, it’s not important how many nozzles are open; that’s why often both is controlled/supervised (at least in Germany). 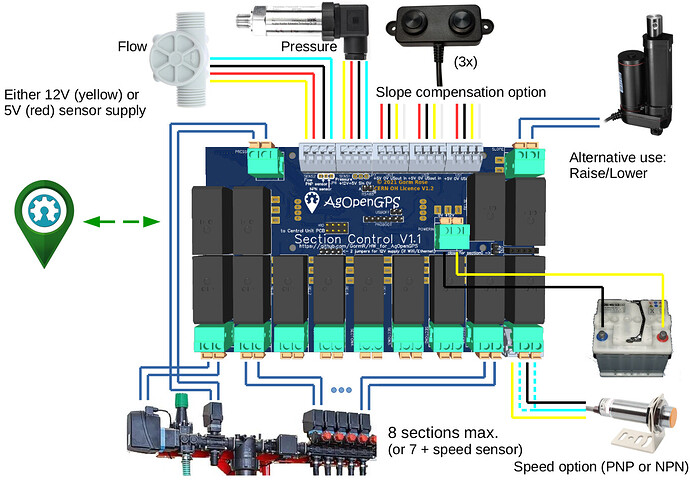 Or you could say pressure depends on flow, nozzle size, density, and the number of nozzles. It’s a direct relationship. Unless you’re doing PWM, you only need to control one of flow or pressure because of this. Flow is preferred because you can PID it without any knowledge of the nozzle size, liquid density, and the number of nozzles, although the rate controller has to calculate the flow based on the volume per area desired, speed and area being covered.

Pressure control has only one advantage and that is it does not matter how many nozzles are open (provided you have done all the calculations).

For most of us, pressure is only useful so you know whether you’re in the range that yields the desired droplet size. Years ago some controllers did PID on pressure, but PID on flow with a valve is so much easier.

Thus for the @Bestgart, I don’t think he’ll want worry about controlling pressure. In other words he’ll want to use the system with all the sensors you describe (flow, etc). Those manual pressure regulator systems are really meant for setting the rate for a single speed.