Project : designing an all-in-one compact PCB for AOG - what do you need?

A few weeks ago, i installed an autosteer on a tractor using the PCB V2 of Brian. This works great and the PCB definitely made the installation easier. However, I found that the complexity of the setup is still too high and I think it can be made more simple. I saw the other PCB designs (like the KaupoiMOD PCB v3) which address this issue, but I’d like to push the reasoning even further.

The project would be a new PCB, designed to fit in an hardened enclosure, embedding all the electronics that are currently somewhere else (ZED-F9Ps, switch / hub, hydraulic lift relay, etc.). To make this new PCB as useful as possible, I’d like to know what are your requirements, you users of AOG. Thus, I made a poll to collect your opinions more easily : 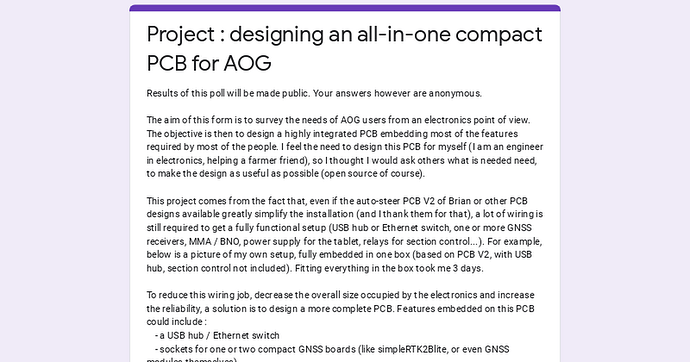 Results of this poll will be made public. Your answers however are anonymous. The aim of this form is to survey the needs of AOG users from an electronics point of view. The objective is then to design a highly integrated PCB embedding most of the...

You will also find there a more detailed description of the project. It should take no more than 5 minutes to answer the poll. If you have more detailed suggestions that can’t feet the poll, we can discuss on this thread.

Many thanks for your cooperation.

You can make an alternative copy of Andreas Ortner pcb.

Or you can design two pcb stacked and connected with board to board connector.

4 layer or 6 layer is easy to produce. cost more, but you can.

you can mount Deutsch DTM headers.

Hi @Stabilo,
Thanks for the suggestions. I gave a look at the PCB of Andreas (this one : https://www.autosteer.cc/produkt/agopengps-set-baugruppe/). It’s a neat setup which groups the F9P together with all the other stuff, precicisely what I want to do. What I miss in this PCB is the rugged connector directly soldered on the PCB (like with the enclosure I suggested above).

TE has effectively a line of rugged connectors called Deutsch. In the same line, they have precisely rugged enclosures with DT or DTM connectors. Unfortunately, both designs are too small to fit everything. Cinch does almost the same thing but has one bigger enclosure size, which is why I chose them.

No need to stack PCBs, and they wouldn’t fit in the box anyway. I can fit a lot of SMD components on the bottom side (2.03 mm height max), which should give enough space on the top side for modules and through-hole components.

I just ran across your discussion with @buched about his PCB : Custom pcb. What I’m trying to do is very similar, only with more stuff on the board (hub/switch, power supplies, more relays, dual F9P…), hence the need for SMD components.

It is the same idea of what you want. 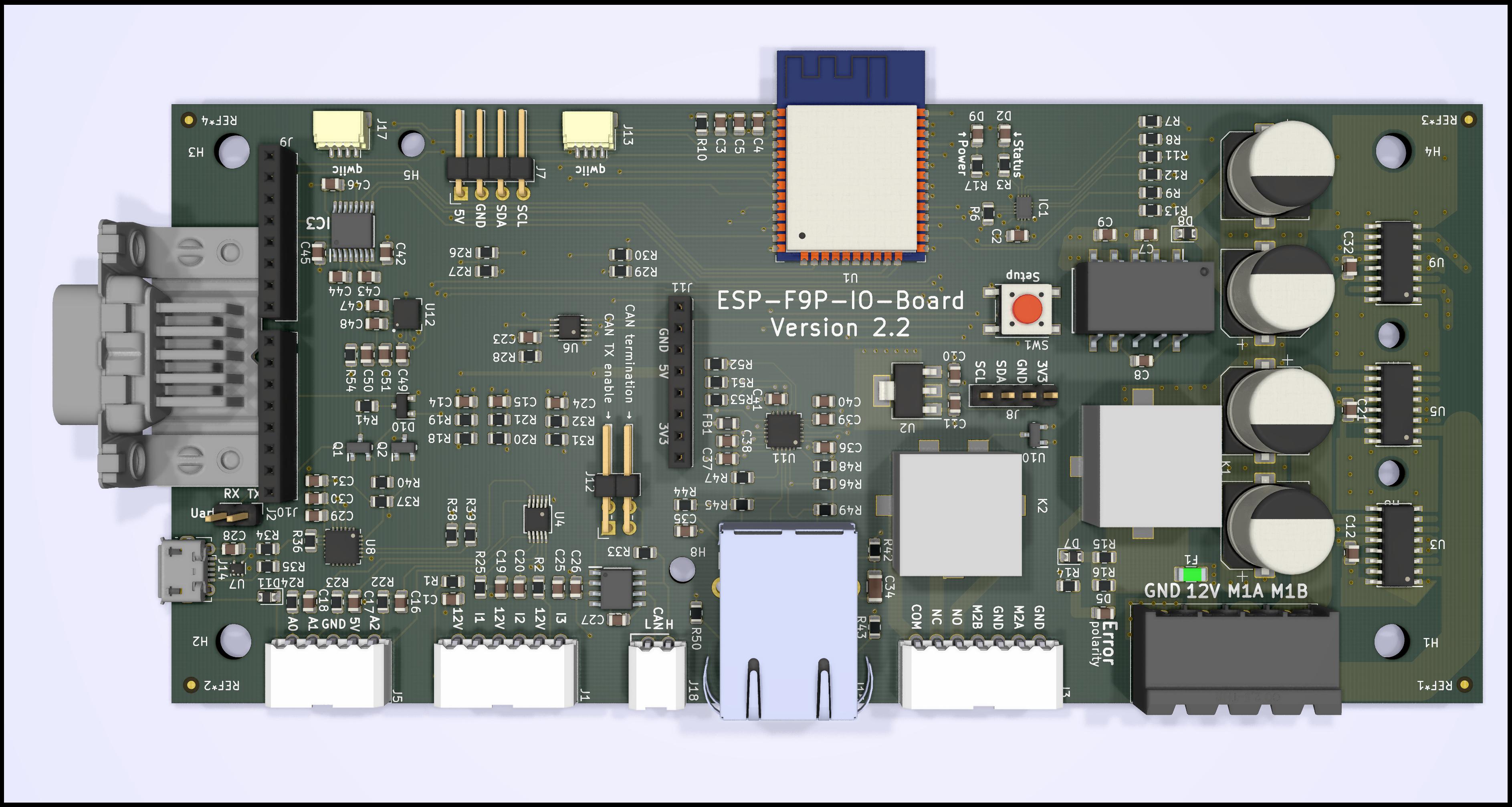 An other type of connection is M12 connector.

I use Andreas and V2 tiles. Andreas are easy to use and work brilliantly. V2 are smaller and when there is no space it is easier to fit them somewhere. On the Andreas board, I would improve the location of NANO and F9P, you would have to either move them inside the PCB to have a place for USB cables that can be led inside the box or alternatively move to the edge of the PCB so that you can connect USB cables directly through the hole in the box. The same is true for V2. It would be great if you moved the nano to the edge of the PCB, then a small hole for the plug is enough and you can connect the cable from the outside of the box without additional adapters.
I make handles for ordinary USB cables on a 3d printer, which I then screw to the housing, they work very well.

Can the connector you think of, handle both low current from sensors and high current for the 12 V in and motor drive out.

Also you might consider this alternative to F9P, and mounted in a PLCC socket (for exchange in case of fault) and with the neccesary breakout components around. https://www.skytraq.com.tw/homesite/PX1122R_PB.PDF
Also used in this thread: Dual GPS using SkyTraQ receivers
Edit here’s a tutorial on how to set up skytraq : Tutorial 6 — NavSpark
The store with a lot of info:
PX1122R : Multi-Band Quad-GNSS RTK Module - NavSpark Store
The datasheet does not indicate any GND on the back
http://navspark.mybigcommerce.com/content/PX1122R_DS.pdf

@baraki I saw the PCB of Andreas, and I think it includes a lot of good ideas. I didn’t see any V2 anywhere though, do you have a link ? About the plugs for cables on F9P and nano, if I go the way I want to, they won’t be a problem as all serial connections will be done using PCB traces. No more cables ! I’m curious about your little handles for USB cables though, do you have pictures ?

@Larsvest connectors for this enclosure are rated for 10 A (see the brochure https://belfuse.com/resources/brochures/cinchconnectivitysolutions/modice/br-ccs-ice-modice-and-shs-brochure.pdf). For extra security, it’s possible to connect the 12V and the GND with two pins for each, giving a max current of 20 amps.
I agree, it would be nice to be able to change important modules easily, using PLCC sockets or headers. If there is enough space available, I’ll do that. The SkyTraQ module looks promising, but I don’t know it so I’ll have to dig deeper (for example, how to build a base station using it ?) (EDIT thank you for having completed your message above)

Here’s a list of PCBs I’ve compiled. The only change that I know of so far is I need to add/change the entry for KaupoiMod, he’s updated his to v3.

Hi @m_elias
Thank you for the link. I will be able to draw inspiration from a lot of these designs.

can you share the STLs or the design files?

TE has effectively a line of rugged connectors called Deutsch. In the same line, they have precisely rugged enclosures with DT or DTM connectors. Unfortunately, both designs are too small to fit everything. Cinch does almost the same thing but has one bigger enclosure size, which is why I chose them.

Trimble made a product called Field IQ with this type of box.

Now Trimble sell an upgrade kit “field iq maintenance pack” for this box, because with agri condition, the box crack and water go in the pcb.

It’s good to know. On the other hand, as indicated by Bel, their ModICE enclosures are designed for “extreme environmental conditions commonly found on commercial and off-road vehicles”. I guess we won’t find anything more solid and reliable than that. If the box stays in the cabin like most people do today, it should be fine. Did you have another reference in mind ?

Matrioska technology is the right choice.

Aluminium or plastic box ip67 or more inside a steel box.

Also think of a place for a single or 2 mosfet switch. It is useful for switching on auxiliary valves, and in standard relays the contacts burn out and noise occurs.

@baraki this sounds like a good idea. What kind of use case do you have exactly ?

I use a mosfet to switch the 6-way valve, and if it is an OC system, also an additional section to redirect the stream from the pump

I see what you mean. It could be useful indeed.
Could this idea be extended to the section control, in place of relays ? Is there people who thought about that ? Are there sprayers or seeders or other tools that can’t work with MOSFET switchs for section control ?

It’s not easy with precision air seder. In the factory controller, switching off a section is a single button that subtracts or adds a section with another press. I don’t know if AOG could control these buttons ??
Disconnecting the motor of the section, the controller, not seeing the pulses from the encoder, displays an error and restoration of the power supply does not = start the engine.
I was thinking to simulate the encoder during AOG engine shutdown and thus cheat the factory driver. Maybe someone has a better idea?
Connecting the EHR switch is also not easy in my MF. Lowering, Raising, Neutral - Each of these switch positions gives a specific resistance pattern on the switch pins. A simple relay does not work.

All right everyone, as promised, here are the results of the poll I made a few weeks ago. I had 24 answers, which a nice sample I think. You can still answer though.

Based on your answers, and also on what I need from this design, here are the colclusions: